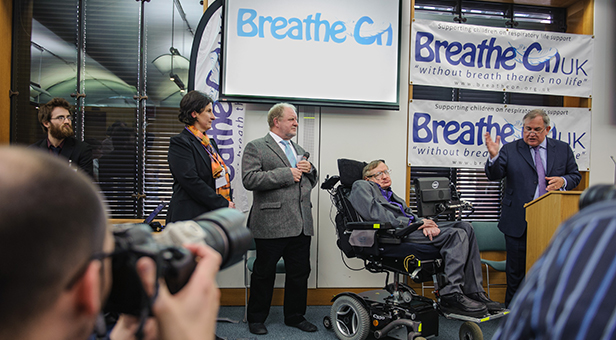 Having backed Breathe On UK since its inception in 2004, Bob was delighted to jointly sponsor this event with Baroness Masham of Ilton, at the request of Victoria Townsend, to highlight the charity’s fantastic work supporting children on long term ventilation (LVT) and their families.

The event was attended by MPs, Peers, representatives from the medical and charity communities and parents and children involved with and supported by Breathe On UK, a number of whom spoke about their own experiences of looking after children with LVT needs. Recorded messages were also played from Patrons Stephen Fry, Prof Stephen Hawking, and Breathe On UK Sports Ambassador, Matt Hampson.

The impetus for the event was the launch of a key report based on parents’ responses to a Department of Health survey called PROMS – ‘Patient Reported Outcome Measures Study of Children on Long Term Ventilation’, which collated information from families with children on LVT about the care and support they receive, identifying what is being done well and where there is room for improvement.

Bob commented: “I was delighted to be able to support Victoria and her team by jointly sponsoring this hugely successful Parliamentary event. I was particularly pleased that Prof Hawking was able to take time out of his very busy schedule to show his commitment to Breathe On UK and I extend my thanks to him and his team.

“I know he will agree with me when I say that the work of this small charity – advising families in acute situations, working to join together professionals and producing this PROMS research to enable a care protocol – should be supported and its achievements celebrated.”