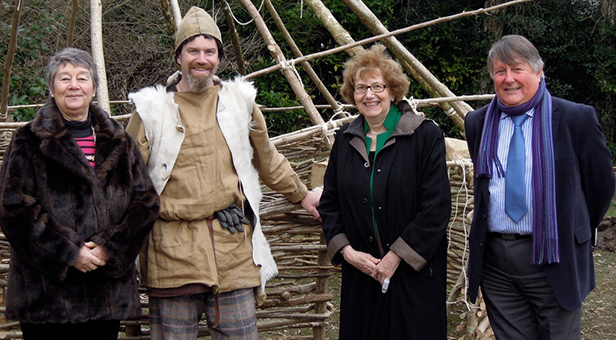 Annette and Councillor Susan Jefferies with Andrew Jones, Chairman of the Governors and an iron Age instructor from the Ancient Technology Centre at Rushcombe First School

MP Annette Brooke visited Rushcombe First School in Corfe Mullen early this week to see the excellent work being done by the staff and pupils. She was particularly impressed with an Iron Age project, which incorporated the efforts of all age groups, and said that she thought the school was a “very impressive learning environment.”

During discussions with Rushcombe’s head teacher and its chair of governors, concerns were raised that the school was receiving less in Pupil Premium than others in the area.

Annette raised her concerns during Education Oral Questions in the House of Commons that afternoon, asking the Minister for Schools David Laws what advice he would give to governors of a school which has a low take up of free school meals and therefore is in receipt of less Pupil Premium than others in the area.

The Minister said that Annette made a powerful point. He added that the department had recently put out information showing the great range in the take-up of free school meals and advice on how schools should seek to raise that figure.

The Government’s Pupil Premium is set to rise to £1.8 billion in 2013-14, with schools attracting £900 per disadvantaged child.

Annette said, “Pupil Premium is a powerful tool for schools. I am keen to ensure all schools are receiving the amount of premium they should be, and will continue to push this issue in Parliament.If a school has a low take up of free school meals, it affects the amount of premium they are receiving. I will press my colleagues to look into this and see what can be done to ensure the system of getting the correct funding out to schools is working effectively.”
Category: DorsetMarch 8, 2013