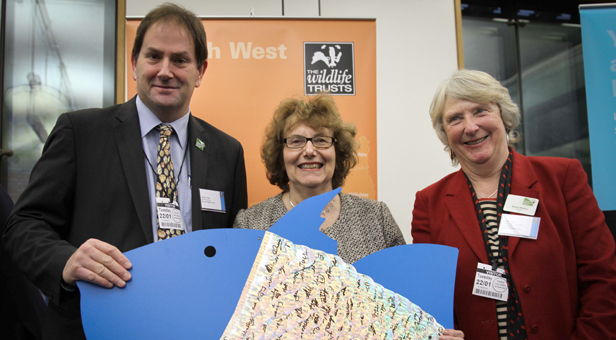 Annette Brooke, MP for Mid Dorset and North Poole has said that proposals to protect England’s seas are vital and have widespread public support.

Annette’s comments come as The Wildlife Trusts held a parliamentary event to show support for the proposed network of Marine Conservation Zones in English and offshore Welsh waters, as the Government consults on which areas should be designated.

The event brought to a close The Wildlife Trusts’ ‘Petition Fish’ campaign, which secured almost 250,000 signatures in support of marine protection. Petition Fish was part of The Wildlife Trusts’ campaign to secure an ‘ecologically coherent’ network of Marine Protected Areas around the UK. This would allow our seas to recover from past damage and sustain current pressures.

Annette said, “I was delighted to join The Wildlife Trusts to show my support for the recommended Marine Conservation Zone network. Our seas are under great pressure. It is vital that we act now to protect them to allow them to recover. We must do so as they provide essential benefits upon which we rely on from resources such as fisheries and aggregates to the ocean processes which help to slow down climate change.”

Joan Edwards, Head of Living Seas for The Wildlife Trusts, said, “The recommended network of Marine Conservation Zones was chosen following an extensive process involving sea users from fishermen and the aggregates industry to divers and boat-users. The proposals represent a significant step forward towards an ecologically coherent network of Marine Protected Areas.

“Disappointingly the Government’s consultation only proposes taking forward 31 of the 127 recommended MCZs this year. We want to see a clear process set out that ensures the initial 31 sites are protected as soon as possible, which sets out a timetable for the designation of the rest of the sites and makes sure vulnerable habitats are not damaged before the MCZs are designated.”

The consultation runs until 31 March. People can respond through The Wildlife Trusts’ website wildlifetrusts.org/haveyoursay