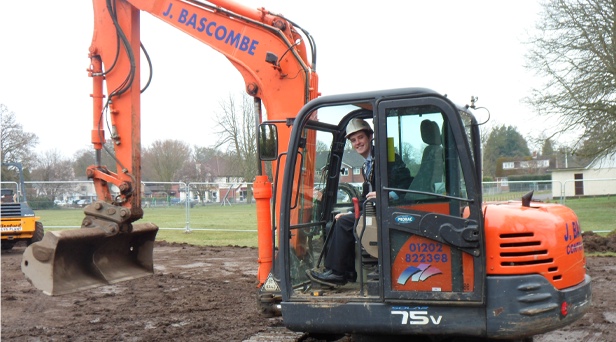 Work has finally begun for the long awaited multi use games area  (MUGA) on Verwood Memorial  Recreation Ground. The project which has been the vision of the AGFA group has been over five years in the planning and will see a free facility in a wet and underused part of the ground.

Mayor of Verwood, Cllr Simon Gibson who is a founding member of AGFA said, “To see work finally start on the MUGA, after such a long time is amazing. This will be a great addition to the town centre and I am sure it will be well used by people of all ages.”

The project, which is has been match funded by Verwood Town Council, should be completed by the start of May and will include a path for easy access to the new facility. Cllr Gibson said, “My sincerest thanks to everyone who has helped raise money for the MUGA. The work of AGFA would not have been possible without the support of the public.

“I am particularly keen to thank the members of AGFA who have work tirelessly to make this a reality. Chairman Angela Daymond and her small team including Marilyn and Ernest Whatmore, Lynn Ledger, Lynn Turner and Jean Hazel have been incredible.”