Narrow gauge steams back to Purbeck 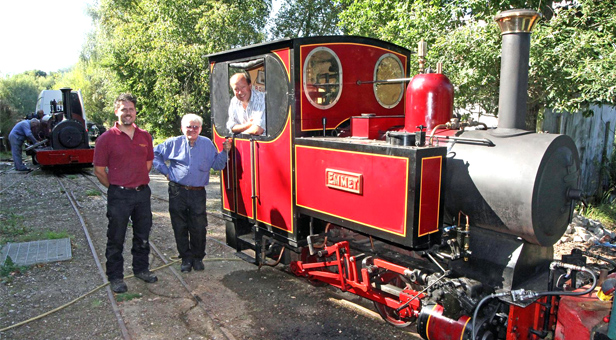 History is to be made this weekend at a Dorset ball clay mine museum near Corfe Castle when a small locomotive brings narrow gauge industrial steam trains back to the Isle of Purbeck – for the first time in 60 years.

Enabling the historic first, since 1953, to take place is a narrow gauge steam locomotive named ‘Emmet’, which has been built on the chassis of a German 1930s industrial diesel locomotive that hauled trains at a ball clay mine at Norden, near Corfe Castle, from the 1940s through to 1970.

The celebration of narrow gauge industrial steam takes place at the Purbeck Mineral and Mining Museum at Norden from Friday to Sunday, 6 to 8 September, 2013, as part of the Swanage Railway’s annual Steam Gala and Vintage Transport Rally.

Museum chairman Peter Sills said: “This is the culmination of 10 years – and more than 30,000 hours – hard work by the Purbeck Mineral and Mining Museum volunteers who have built the Norden clay mine from scratch on the site of the old Victorian ball clay works demolished during the 1970s.

“The running of the first steam-hauled narrow gauge ball clay trains in the Isle of Purbeck since 1953 – the year of our Queen’s Coronation – is an incredible moment that I honestly thought I would never see. It’s really tremendous and very historic.”

‘Emmet’ was built on a chassis that came from a 1930s narrow gauge German diesel shunter that worked at the Kiel Docks before being shipped to England after the Second World War for a new working life hauling ball clay trains at the Norden clay mines from the late 1940s to 1970 when the lines were closed and lifted for scrap.

Peter Sills explained: “What makes the occasion even more special and historic is that ‘Emmet’ is returning home to the Isle of Purbeck’ because its chassis came from a German narrow gauge diesel shunter that hauled ball clay trains around the Norden clay mines for more than 20 years.”

Also on display, but not running, will be the historic Victorian narrow gauge saddle tank steam locomotive No 542 ‘Cloister’ built by Hunslet of Leeds in 1891 for the Dinorwic slate quarry.

Now belonging to the Hampshire Narrow Gauge Railway Trust after the locomotive ‘retired’ in 1962, the 0-4-0 wheel arrangement locomotive was named after the Grand National winner of 1893 as the quarry owner was a horse racing enthusiast.

The Purbeck Mineral and Mining Museum at Norden is open from 11am to 5pm, Friday to Sunday, 6 to 8 September, 2013, with free admission – although donations are welcome to help fund continuing preservation and development. For more details, call 01929 481461 or go on-line and visit www.pmmmg.org.