New Chair for Wimborne in Bloom 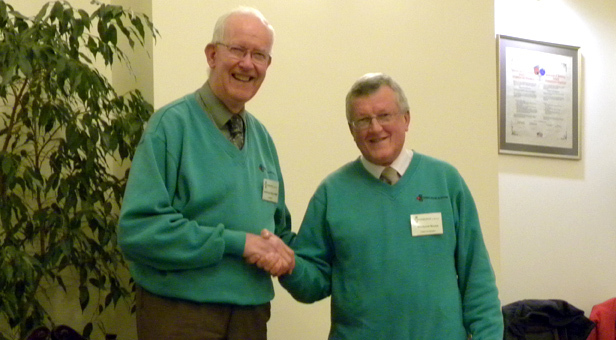 Richard Nunn was elected as chairman of Wimborne in Bloom at its annual meeting on 28 January 2013.

He succeeds Anthony Oliver MBE who had been chair for 20 years and felt the time was right to take more of a back seat. Anthony stands down on a high note because last year was the first time the town won gold in the National Small Town Title of Britain in Bloom. It also received silver gilt in the regional competition. He thanked everyone for all the help and support he’d been given since Wimborne in Bloom’s inception in November 1992.

Richard Nunn said, “I must convey the very sincere thanks of the current committee members, and their predecessors, to Anthony for his unwavering leadership and both Anthony and Christine for their sheer hard work over the last twenty years. Taking Wimborne in Bloom from its inception, through an illustrious two decades, to the ultimate achievement of a national RHS Britain in Bloom title is quite remarkable. What an example – and an almost impossibly hard act for anyone to follow.”

During the meeting it was reported that a successful fund raising year had grossed a little over £18,000, but with expenses being in excess of £19,000, the committee had to draw on its reserves.

This year’s committee includes a new member, Sue Bullen with the remaining members being re-elected apart from Michael Stevens and Pauline Collins who had resigned last October and moved away from the area.

Anthony Oliver was persuaded to remain on the committee.

Mr Nunn outlined the year’s programme and particularly appealed for those who might be willing to open their gardens on our Open Gardens Day, Sunday 23 June to get in touch. Ring him 01202 888793.