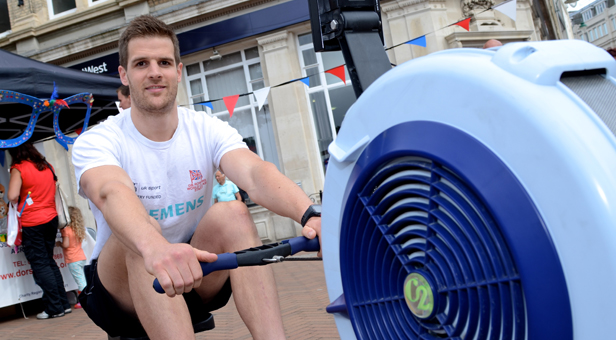 Not content to leave it to others to raise much-needed funds, visually impaired members of Dorset Blind Association put their backs into it to row 10,000 metres on rowing machines in Bournemouth Square earlier this month.

They were joined by teams from morebus, Barclays, West Hants Club, Lidl, Elstead Hotel, English2000 and Rotaract to compete for the fastest time; while passers by paid £2 each to attempt to beat the time of Olympic standard rower Simon Banwell to 250 metres.
“In life, like rowing, you get out what you put in,” says Chris, who lost his sight five years ago and now volunteers to help other people with sight loss.
“We don’t want you the public to just give us their support; we want to earn their support.”
For the not so sporty there was face painting, free goody bags and chances to win prizes playing games.
Dorset Blind Association gives people affected by visual impairment the tools to lead full, active and independent lives helping up to 1,000 blind or partially sighted people in the county each month.
“This was a great event and a wonderful way to meet members of the public with the help of volunteers from Barclays and, of course, the amazing visually impaired people we support – our VIPs,” said Jaya Da Costa, Dorset Blind Association’s fundraising manager.
The time trial was won by Brian Hampton from Lidl who completed 10,000m in 42 minutes 43 seconds, winning six tickets on the Bournemouth Eye Balloon. In a close-fought contest, second place went to the team from morebus (42m 50s) winning acoustic shooting for six.
The Elstead Hotel came a respectable third (43m 30s) followed by English2000 (44m 20s), Lighthouse (46m 25s) and Rotaract (50m).
The event, sponsored by Abbey LIfe, raised £2,285.