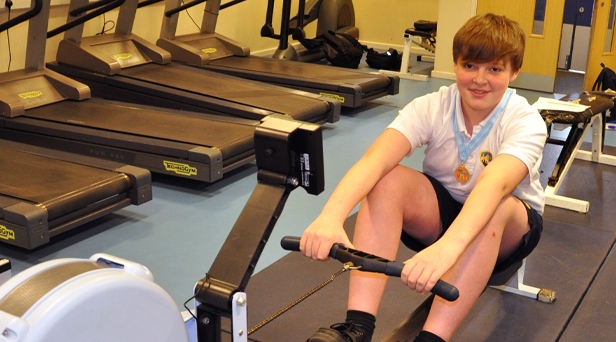 A Bournemouth student has been crowned the national indoor rowing champion for his age group.

Lewis Bradbury, from Harewood College, has become the first student from Dorset to win a coveted national champion award at the National Junior Indoor Rowing Championships. Lewis rowed an incredible 541m in just two minutes to make him the Year 7 Boys National Champion.

He said:  “I am so pleased that all my training has paid off – it feels so good to be able to say I’m a champion.

“My coach Mr Sawyer trains with the rowing teams at Harewood every day of the week and it is his dedication that has made it possible for all of us to compete to such a high level.

“The older boys have also helped me to improve my technique and stamina and we all push each other to improve.”

This year’s event, held on the outskirts of the Olympic Park at Lea Valley, attracted more than 2,500 competitors drawn from 200 rowing clubs and schools from across the country.

Lewis will now join Harewood College Year 7 team-mates Omar Ibrahim, Thomas Cave, and Mitchell Jarmey to compete in the 2,000m indoor rowing relay in the Dorset School Games Final being held this Friday (March 22) at Oakmead College; where they are aiming to break the British record.