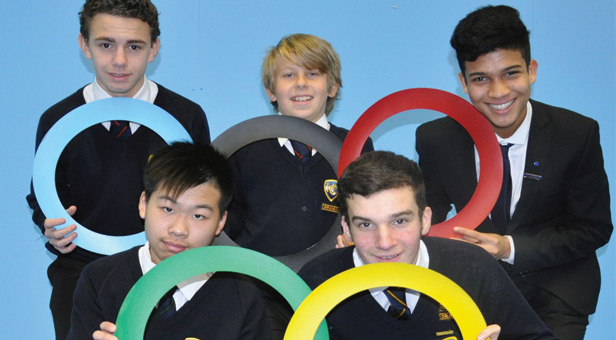 Boys at Harewood College in Bournemouth, which last year achieved its best ever GCSE results with 51% gaining at least five A* to C grades including English and Maths, is recognising students who are achieving great successes through an Olympic award scheme.

Every time a student excels they are given an Olympic ring. When they get all five rings they are awarded a special trophy: blue is excellence; black is friendship and respect; red is inspiration; yellow is equality; and green is determination and courage.

Five boys already to receive their rings have all been recognised for very different, but equally excellent work.

Twelve-year-old Luke Dyas won his blue ring for his daily commitment to activities organised by the school.

Talented Jurrell Jackson has received a red ring for his exceptional acting and singing. The 16-year-old won the school’s annual talent competition and also performs with the Big Little Theatre Company.

Year 10 student Charles Graham goes out of his way to help students and staff and in his own time volunteers at the Sunrise care home in Southbourne. He has won a yellow ring in recognition.

And finally, Hin Li has won his green ring for never missing a day’s school or ever being late.

Executive headteacher Debbie Godfrey-Phaure said, “The students are really being inspired by this awards scheme, which recognises all achievements – both at school and in the community.

“It’s wonderful to see every single one working towards getting their Olympic ring and it’s so heartening to hear of all the wonderful things individual students are achieving.”