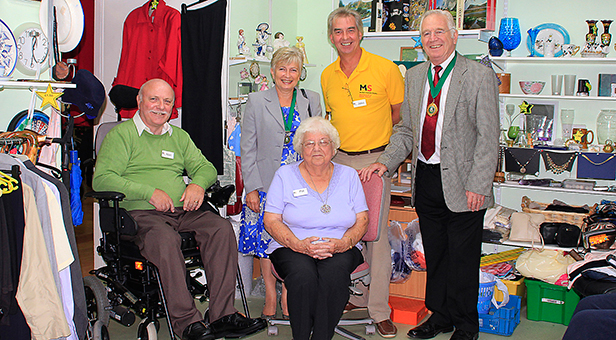 Ferndown Mayor, Cllr John Lewis and his wife Barbara visited the MS Society’s Osborne Centre at  Church Lane, West Parley last week.  They were greeted by the President Alan Lindsay and Chairman John Astley, and were then taken on a tour of the facilities meeting many of the multiple sclerosis sufferers who visit regularly, as well as volunteers, without whom the Osborne Centre couldn’t run.

In Aladdin’s Cave  –  the centre’s shop  –  they met Pat Richardson who has been a volunteer for thirty years  –  she remarked that she is just getting used to the work!

The Osborne Centre is run by the MS Society, Bournemouth branch and offers a place to meet for people with MS and their carers. Transport is arranged for the less able and lunches, teas and coffees are provided at a reasonable cost.

MS is a neurological condition that affects around 100,000 people in the UK. For more details visit www.mssociety.org.uk