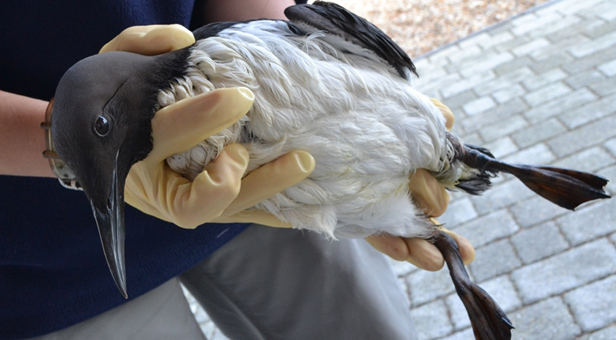 A week after the first reports of birds covered in a sticky glue like substance being washed up on South West beaches, wildlife charities have today confirmed that the number of dead has passed 1000. This is in addition to the 200+ birds in the care of RSPCA and South Devon Seabird Trust.

The substance has been identified as polyisobutene (PIB) by researchers at Plymouth University. It is the second time in just three months that PIB has killed hundreds of seabirds in the South West.

In this latest incident birds have been found in a wide area from Dodman Point, Cornwall to the Teign Estuary, Devon but the worst hit areas have been beaches along Whitsand Bay in south east Cornwall where locals have been counting hundreds of birds every day.

Alison Fogg, zoologist and environment campaigner who lives by the sea near Lanteglos in Cornwall has been close to the unfolding disaster; “It is hard to sum up so many different emotions, from the last few days, in a few words …

“Seeing over 157 dead birds on Lansallos beach, followed by hundreds more at Lantic Bay, was quite devastating. Lansallos is a small sheltered beach on the South Coast of Cornwall. A haven for nature and totally unspoilt, this beach is popular with holiday makers, walkers and locals for swimming and relaxation.

“The scale of destruction to wildlife, in the beginning of the bird breeding season and at the start of the tourist season is quite difficult to comprehend.”

It is not known whether the substance got into the sea as a spill from a ship or as part of legal and routine tank washing operations.

Tony Whitehead from RSPB said; “The devastation this substance has caused has been appalling. To see the images of beaches strewn with bodies is a sobering reminder that we just cannot go on treating our precious marine environment as a dustbin.

“If this was an illegal spill, we need to support the Maritime and Coastguard Agency in tracking down the ship responsible. Although this will be difficult, surely it’s not impossible.

“If this was the result of legal tank washing operations, we need to urge the International Maritime Organisation (IMO) to tighten up the rules and make it illegal to wash this stuff into the sea.  It’s a noxious substance and we don’t want it in our marine environment.”

Abby Crosby, Marine Conservation officer for Cornwall Wildlife Trust; said; “The public have been calling our Hotline in droves and our brilliant strandings volunteers have been sending in their reports but, as dead birds may continue to wash up, we need to keep on recording.”

Harry Barton, Chief Executive of Devon Wildlife Trust said; “This is an absolute tragedy for wildlife, but it is bad for all of us too.  Our region is famous for its stunning natural environment and clean beaches, and that is why we have such a successful tourist industry.  The prospect of wading through piles of dead birds on the shore is hardly the advertisement we want.  This is the clearest possible sign that our economy depends on a healthy natural environment.  Pollution incidents like this can be prevented if the political will is there to do so. We must act quickly and decisively to stop this happening a third time.”

Marc Smith, Chesil Centre Officer at Dorset Wildlife Trust and one of the first on the scene at the similar incident in February this year on Dorset’s beaches, said: “It was heart-breaking the first time around, seeing hundreds of birds washing up dead or helpless along our shore. Knowing this was preventable made the whole thing really stick in your throat. Now it is happening again only two months down the line. We need to stop the discharge of PIB into our seas. It’s as simple as that.”

The Wildlife Trusts, RSPCA and RSPB have this week written to shipping minister  Stephen Hammond calling on Government to urgently raise the issue of PIB in the marine environment with the IMO and call on them to urgently review the hazard classification of PIB, and implement regulations that prevent its discharge into the sea.

Tony Whitehead from RSPB added; “People care about marine wildlife. We’ve had hundreds of messages expressing concern via Facebook and Twitter. And a number of MPs in constituencies touched by this disaster have called for action. We need everyone who is appalled by this to make their voice heard.”

Members of the public wishing to add their voice to calls for the discharge of PIB into the sea to be banned can sign the 38 Degrees petition or the Avaaz petition and contact their own MP and ask them to raise the issue with the minister responsible.

What is PIB?
Polyisobutene (PIB), also known as polyisobutylene or butyl rubber, is a non-toxic and non- aggressive substance, used for example to manufacture chewing gum, adhesive tape and sealants. It is also very sticky – PIB is what makes cling-film stick to whatever it touches. In shipping, it is often used as a thickening agent for industrial lubricant oils.
PIB was first developed in the 1940s as a synthetic alternative to natural rubber which was in short supply due to conflicts in rubber-producing regions. As a substance, it is generally colourless or light yellow, odourless, tasteless and cannot easily be identified. One of its special properties is that it is the only form of rubber that is completely impermeable to gas as well as water.

PIB, along with other non-petroleum products, is transported around the world on a regular and increasing basis. The global consumption of PIB was over 850,000 tonnes in 2011, with the USA as the leading producer, but Belgium and France together produce almost a fifth of the PIB market. The UK is also a major importer. As a consequence, there is considerable transport of PIB around the UK and Western Europe. Global consumption is forecast to increase by around 40% by 2017 to 1.2 million tonnes per year.

What are the impacts of PIB on seabirds and marine wildlife?
PIB usually enters the water through ships ‘flushing’, or washing, their tanks and clearing ballast water. PIB is a hydrophobic substance though, so on contact with water it coalesces into a waxy, glue-like formation, generally floating at or just underneath the surface. As such it is extremely hazardous to a range of seabird species, which dive to find food. These birds become covered in the substance, which sticks their wings to their bodies and prevents them from feeding, causing immobilisation, hypothermia, starvation and eventually death. There is also a risk of ingestion of bits of PIB in its waxy form.

The effect of PIB on seabirds is graphically illustrated in this video: http://youtu.be/10FLdTkj8Os (Note: This is from the first incident in Dorset. This bird was on an isolated beach at the bottom of a steep cliff and could not be reached by rescuers; it was filmed from the top of the cliff).

PIB is defined as a `persistent floater’. It is also very slow to degrade (and is not biodegradable), so there are likely to be delayed and less visible wider impacts on marine ecosystems for a long time after any initial spillage. These effects are not however currently studied.

What are wildlife charities calling for?
Wildlife charities believe that the risk of PIB to the marine environment is seriously underestimated under current regulations. As such, they are urging the Government to call on the International Maritime Organisation (IMO) to urgently review the hazard classification of PIB, and implement regulations that prevent any further tragic and wholly avoidable incidents like the one just witnessed. This requires one or more member countries of the IMO to raise the issue in the formal IMO channels.

Under the terms of the MARPOL Convention, this would require as a first step the reclassification of PIB from category Y to category X, covering “Noxious Liquid Substances which, if discharged into the sea from tank cleaning or deballasting operations, are deemed to present a major hazard to either marine resources or human health and, therefore, justify the prohibition of the discharge into the marine environment”.

This action is one of five proposed by RSPB to lessen the risks that discharges from shipping pose:

1. An urgent review of the hazard classification of PIB and other legally dischargeable substances, in relation to their impacts on the marine environment (including seabirds).

2. The testing of Annex II substances for their effects in more realistic marine conditions, which takes into account the effects of changes in consistency, time to degrade, toxicity if ingested and in-combination effects when mixed with other substances.

4. Commitment to further scientific research on the effects of contaminating noxious substances on wider aspects of marine ecosystems, in addition to charismatic megafauna such as seabirds.

5.  The strictest possible enforcement and prosecution of illegal discharges of any polluting substance at sea.