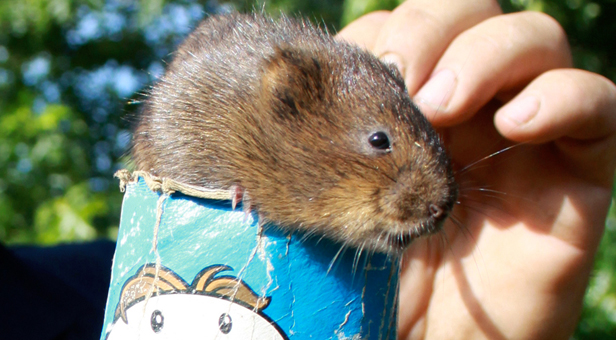 Water vole about to be released at Moors Valley © Hattie Miles

Water voles are thriving at Moors Valley Country Park and Forest thanks to the dedication of a team of Countryside Management Rangers. Their success is particularly rewarding as it comes at a time when conservationists nationally are reporting a further 20% decline in an already threatened population.

The park commenced an extensive water vole reintroduction programme in 2011, which was followed in 2012 by a further release. In all over 300 water voles found a new home in East Dorset and sightings throughout 2013 indicate that the reintroduction was a huge success with water voles now seen regularly along the extensive Crane and Moors river system.

“Moors Valley was the first country park in the south to take this initiative and we believe our hard work has really paid off for our water vole families,” said Matt Reeks, Senior Countryside Ranger. “The project has also united the local landowners who we brought together and encouraged to provide suitable habitats and continue to monitor a wide surrounding area for mink activity to ensure our voles are not be eaten by this aggressive, non-native predator.”

Good habitat management is crucial to the success of a programme of this nature. The river system in the park is a Site of Special Scientific Interest (SSSI) and Natural England, which inspects SSSIs, has put it in its top-rating category. Its careful management is a testament to the work of the ranger team that not only ensures the success of the park’s wildlife but also plays host to over 800,000 visitors each year at what is now the third most visited county park in England.

“We have had many sightings of water voles near their release area over the last two years, and recent indications show they are now populating the river system adjacent to Moors Valley,” said Matt. “We are interested in finding out how far they have moved along the river system. I’d ask anyone visiting Moors Valley or strolling by the Moors River to keep their eyes open – and listen out for the distinctive ‘plop’ of the vole when it enters the water – and report any sightings to the Visitor Centre. We log all confirmed sightings and they will help us to ensure the future of the water vole in East Dorset.

For more information on the water vole programme and the full range of nature-based activities available at the Moors Valley Country Park and Forest contact the Rangers on 01425 470721 or visit www.moors-valley.co.uk.
Admission to the park is free, parking charges apply.

Britain’s fastest declining mammal: the national population is estimated at 400,000, a 1/3rd of the 1.2m estimate just 10 years ago.

Lifecycle: Average 5 month lifespan in the wild, 3 or 4 litters a year, averaging 5 to a litter, young voles are weaned at 14 days. Live in burrow complexes in river banks. Vegetarian, 227 plants have been identified as part of the water vole diet. Distinctive features: furry tail, hard to see the ears.

Spotters guide: watch for 4 toed star shape tracks. Listen for distinctive ‘plop’ as they launch themselves into the water. 200 water voles were released into the Moors Valley river system in 2011.