Petition to save Wimborne’s TIC 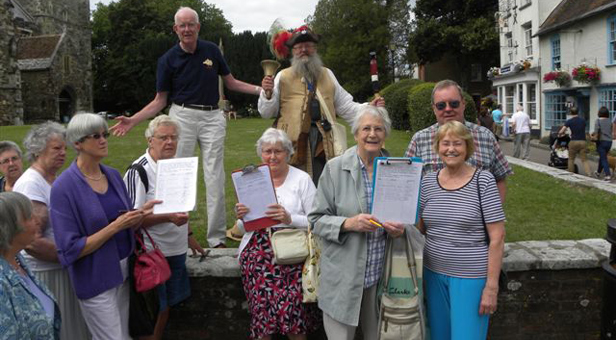 Following the announcement made by East Dorset District Council that it will be axing the tourist information centres in Christchurch and Wimborne, people from as far away as Spain have already rallied to save the TIC in Wimborne.

Town crier Chris Brown and Anthony Oliver, MBE, former town mayor and chairman of the minster’s tourism committee launched a petition. Chris made a special ‘cry’ to start it off and in just two hours over 300 people had signed it.

Anthony Oliver said, “They came from far and wide including Bath, Plymouth and Spain. Two ladies from Bath commented that on arrival in the town, the first place they went was the tourist information centre for a map and to find out what was going on in the area. They didn’t use an on-line facility because they hadn’t got it.

“The council say this is one of the reasons for the change that people are now doing more and more on line.

“Three other couples had just moved to the town and were full of praise for the TIC and all the helpfulness they had received.”

Anthony Oliver continued by saying that he and Chris Brown and many others were full of praise for the staff at the TIC and also for the tourism officer Rachel Limb.  “They are always friendly and so helpful in answering the many queries from residents and visitors alike who call in at the TIC in their hundreds throughout the year. We have to explore every avenue possible to make sure the centre does not close as threatened for November”.

You can sign petition forms in Square Records in the High Street and in Rumours Hairdressers in Crown Mead. Groups and organisations can obtain further copies from Anthony Oliver on 01202 888703.