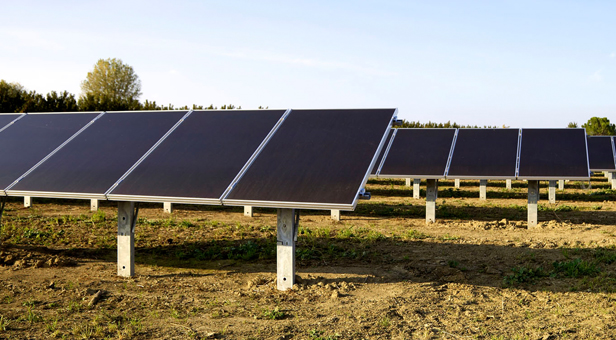 Here comes the sun: An example of PV panels used in a solar power farm

PLANS to site one of the UK’s biggest solar energy farms on the outskirts of Christchurch have been approved by councillors.

Work has now started on building the 118 acre (48 hectare) farm at Parley on land operated by Eco Sustainable Solutions.

The area involved is the equivalent of 65 football pitches or just under 1,900 tennis courts.

The £15 million scheme will use photovoltaic (PV) panels capable of directly converting sunlight into electrical current.

It will generate approximately 20 megawatts (MW) of low carbon ‘green’ electrical power, meeting the electricity needs of about 5,000 homes.

Currently used for turf cultivation, the Chapel Lane site has been specifically chosen for its screening with established hedgerows or woodland surrounding the proposed farm.

The planning application was submitted by Solar Power Generation Ltd which builds, operates and maintains large-scale solar PV parks across the UK.

It has completed the development of 26MW solar projects with work currently underway on a further eight schemes, each generating in excess of 5MW.

He added: “Parley Solar Farm will be one of the biggest in the UK, offering a low carbon, renewable energy source.

“This is a key element of our plans to create an integrated renewable energy park at Parley which will also include anaerobic digestion and biomass facilities.”

Their height will allow the land to still be used for agricultural use, specifically grazing.

The solar farm is expected to take about six months to build and, once commissioned, will operate for approximately 25 years.