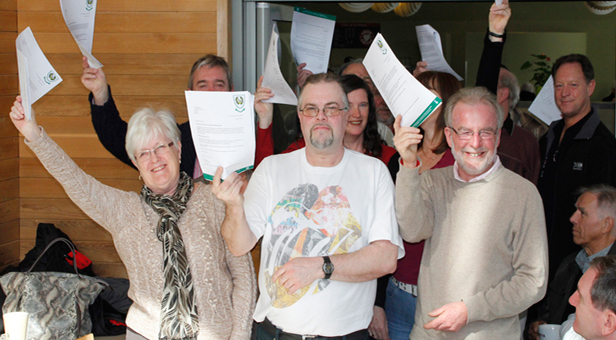 The 24 new allotment plots at Longham were allocated today by the Ferndown Town Council at Haskins Garden Centre. Peter Henrda, Cllr Jean Read and Cllr Steve Lugg were pleased to announce to a packed meeting that the first 16 on the waiting lists had been allocated the plots of their choice. The first plot went to Mr and Mrs Bacon. They were delighted. Mr Bacon said, “I do the digging and my wife does the planting. We are looking forward to it.” His wife Ann added, “We have been on the waiting list for nearly three years. We are going to grow vegetables. We love stews with parsnips, carrots and green veg. So the plot will reduce our bills. We live in a flat and have waited a long time for this.”

The largest plots were allocated by ballot and not everyone who attended the meeting was successful. However, they were assured by the council that they were at the top of the waiting list and would be allocated plots as soon as more became available.