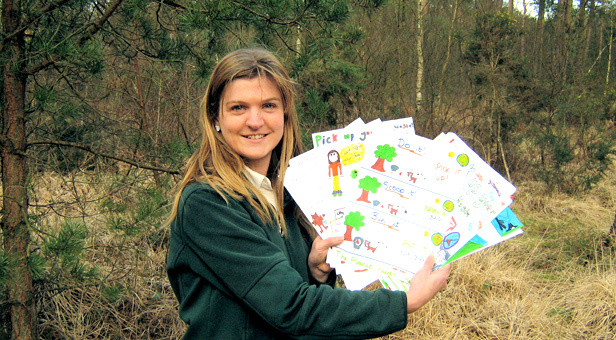 Visitors to three Ferndown commons:  Parley, Ferndown and Poor Common will soon be seeing posters reminding them to pick up after their dogs following competitions held with local schoolchildren.

Pupils from Parley First School, now in Years 4 and 5, designed posters raising awareness of the importance of being a responsible dog owner after visiting Poor Common with Rangers from the East Dorset Countryside Management Service.

The pupils had come to learn about the heathland plants and wildlife but found there was so much dog dirt around that they ended up looking out for poo rather than looking out for bugs.

The posters encourage dog owners to pick up after their pet, but it’s not just because of the unpleasantness of stepping in the stuff.

East Dorset Education Ranger, Tracy Standish explained, “The dog dirt can actually cause a change in the soil nutrients which then encourages non-heathland plants to grow at the exclusion of heathland species.

“The posters promote the damage which can be caused by letting your dog foul on the heathland, but they also highlight the enjoyment had by many on these sites, which can be quickly ruined by stepping in something unpleasant.

“We’re very grateful to the children for taking the time to share with us the importance of their local sites.”

The pupils who visited Poor Common tried their hand at four activities – pond dipping, minibeast hunting, making a heathland bookmark from heathland plants and finding out about reptiles.

The posters were completed in class as a follow up to their visit and three pupils from each of four classes received prizes of a day’s parking pass to Moors Valley Country Park. Many of the posters by the young artists will be displayed at the three commons over the next few weeks.