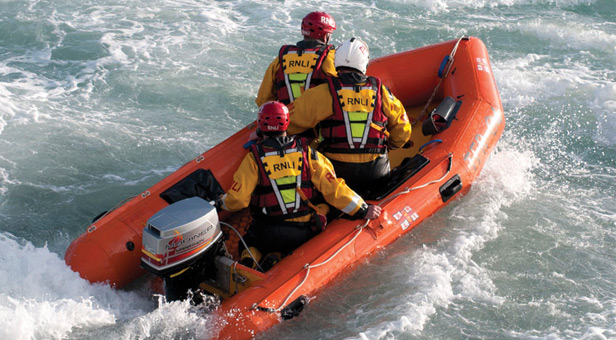 A busy year for the RNLI in the south west including the Channel Islands was affected by the second wettest year on record.  The poor conditions are particularly reflected in the lifeguard statistics which are down on 2011 and 2010. The volunteer lifeboat crews in the region launched 1,507 times and the RNLI lifeguards dealt with 10,216 incidents.

The volunteer lifeboat crews of the south west spent a collective 16,822 hours at sea on emergency call outs with Weymouth RNLI volunteers spending the longest time at sea – 2,981 hours – probably due to the increased need for search and rescue cover to ensure the safety of visitors in the area during the Olympics.

In keeping with the weather conditions, the RNLI’s Flood Rescue Team had their busiest year on record, deploying 11 times across the country with six of their destinations being in the south west. In December volunteers saved the life of a woman who had been washed from her car at Umberleigh in Devon and assisted 12 people caught in flood waters at Lostwithiel, Cornwall.

The busiest beach was Perranporth in Cornwall where RNLI lifeguards dealt with 615 incidents and assisted 672 people.  Second busiest was North Fistral near Newquay where the charity’s lifeguard’s attended 394 incidents, assisting 348 people. Third busiest was Woolacombe in North Devon with 383 incidents.

In Dorset, Bournemouth East beach was the busiest individual beach with 291 individual incidents over the summer. While on Sandbanks in Poole they dealt with 250 incidents.

Andy Hurley, RNLI Regional Operations Manager, says, “The figures illustrate just how dedicated our volunteer crews and our lifeguards are, giving a huge amount of time to saving lives at sea and I thank them and their families for their continuing commitment. I would also like to thank all those who support our charity because their donations ensure our teams have the best training and equipment.  Our fundraising volunteers are as dedicated as always and even now are preparing for the RNLI’s annual SOS fundraising day on Friday 25 January.

“Call outs to sailing and power boats with machinery failure are still our core business in the south west, but I’m delighted to say the numbers are down which I hope means our prevention messages are getting through to people before they go onto the water. However we have seen a rise in the number of fishing boats needing our assistance and in rescues of people ashore, that’s folk who are perhaps injured, trapped or cut off by the tide around the sea shore and cliffs.

“Despite the poor weather our RNLI lifeguards have been busy but the figure of 11,670 people assisted is relatively small when you consider that a staggering nine and half million people visited the lifeguarded beaches of the south west last year.

“2012 has once again proved the value of the RNLI volunteer lifeboat crews, lifeguards and Flood Rescue Teams. All have maintained their commitment and this has been reflected in particular at Port Isaac where three of the crew of the D class inshore lifeboat have been recognised with RNLI Gallantry Medals that will be presented at the charity’s Annual Presentation of Awards in London in May this year.”