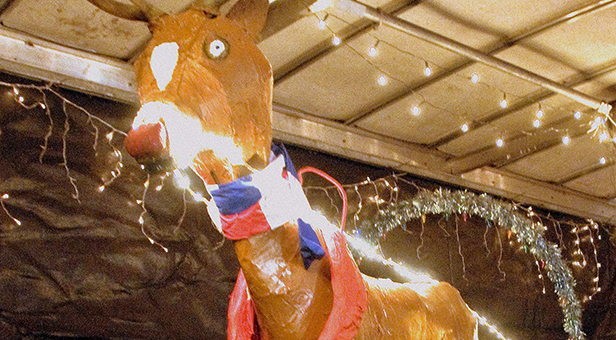 Oh dear, Father Christmas is in a dilemma. Poor old Rudolph is very depressed, and it seems he might not be well enough to accompany Santa on Christmas Eve in the Ringwood Market Place.

“I am really worried about Rudolph,” said Santa in an email to the Rotary Club of Ringwood last week, “He has been looking poorly for some time now, his head is beginning to droop badly, and his skin has become all patchy and his nose has lost its red shine. The trouble is, he’s gone downhill ever since he heard he was going to become homeless, because his comfy stable is being re-developed.

“Rudolph has been my companion here in Ringwood for a great number of years now,” continued Father Christmas, “He loves to stand on that Ringwood Brewery lorry on Christmas Eve and watch all the boys and girls and mums and dads bring all their gift parcels for me to deliver to needy children later that night.”

Rudolph has been living in his stable courtesy of Raymond Brown Ltd for some time, but now it has to be re-developed, he has nowhere to go. He could be left out to graze on Bickerley Green, but his health would deteriorate further, and he certainly is not fit enough to return to Lapland.

The Rotary Club of Ringwood would love to hear from anyone who could offer a retirement stable, away from the elements, so his nose can shine again and he can continue to escort Santa at Christmas in Ringwood. Actually, a space in someone’s garage would be most helpful.

“Finally, I can assure you all,” said Father Christmas in a recent tweet, “That I will be there in the Market Place Christmas Eve, with or without Rudolph, I will not let the children down. However I do know the Rotary Club of Ringwood would like some help to organise the event, so if you are interested, please contact Caroline Millman caroline.millman@lineone.net “