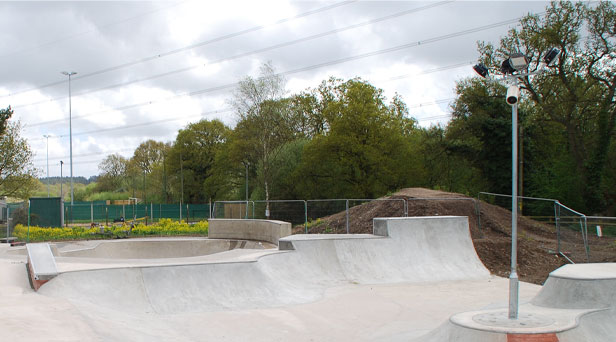 Cllr Lucy Clark, Chairman of East Dorset District Council will officially open the extension to the popular BMX and skate park at Potterne Park in Verwood on Sunday 12 May.

The day will feature a Skatejam for skateboarders and BMX bikers from 10am to 5pm. The event promises to be an exciting one with a selection of competitions with spot prizes as well as freestyle displays from members of one of the nation’s most high profile skate teams – the Vans Team.

Through a special design concept the new facilities cater for beginner riders but also provide a street/urban park for more experienced users. The extension has been designed in consultation with BMX and skate park users.

With the addition of LED flood and feature lighting, as well as an integral youth shelter and the already well-used existing dirt track, bowl and speaker system, the park will become a gold standard destination.

The extended facility was funded via contributions from the Heathland Mitigation Fund, East Dorset PACT (Partners and Communities Together) and Synergy Housing and was project managed by East Dorset District Council’s Countryside Management Service.