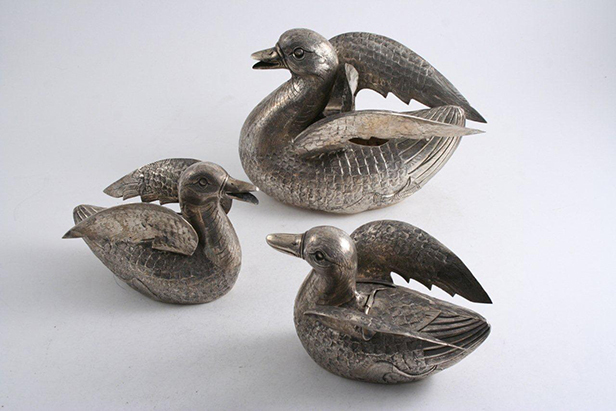 An early 17th Century spoon, possibly made in Salisbury in the reign of King Charles I, was scooped up for £810 whilst a rather different item for the table, in the form of 24 German dessert dishes, exceeded their estimate to take £2390. A little group of three Indian ducks, forming an unusual teaset, exceeded the £600-800 estimate to make £4180.

A pair of regimental claret jugs took £3460;  a pair of candlesticks were bid to £1610.  A fine Victorian soup tureen, bearing the crest and motto of the Sassoon family, took £4900. A wooden casket covered with shagreen (sharkskin), made by Omar Ramsden in 1935, was bid to £1550.

Objects of vertu proved very poplar and internet bidding dominated the action for the last section of the sale. There were some big prices for tiny works of art and highlights included £950 for a gold cigarette case; £710 for a small Royal Worcester scent bottle; £810 for a 17th Century miniature of a gentleman, barely the size of a matchbox label and £1430 for an 18th Century Italian fan, decorated with a view in Venice. This last item was especially relevant as the the temperature outside the auction house reached 80F.