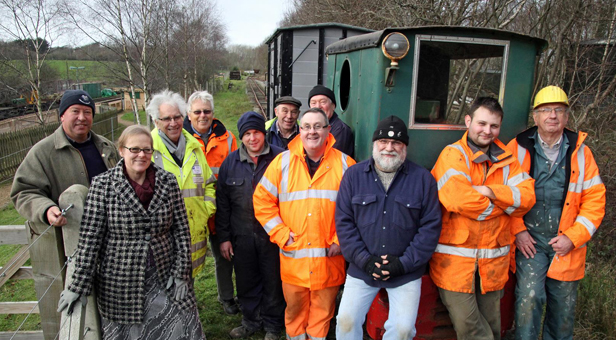 Featuring the people that shaped the landscape of Britain, the 25-minute ‘Open Country’ episode will be broadcast nationwide on Thursday, 15 January at 3pm before being repeated at 6.07am on Saturday, 17 January.

Presenter Helen Mark visited the Purbeck Mineral and Mining Museum – built from nothing since 2002 and located next to the Swanage Railway’s Norden station – during December, 2014, to interview the chairman of the museum’s volunteer group Peter Sills as well as respected Purbeck ball clay mining historian Chris Legg.

The  museum has taken a small and very dedicated team of volunteers some 12 years and 40,000 hours to plan and build from scratch on the site of old ball clay works demolished during the 1970s.

Last year, the Purbeck Mineral and Mining Museum won the Heritage Railway Association’s prestigious 2014 Interpretation Award for quality with the judges praising it for being “unique”, “a valuable education resource”, “a quality visitor attraction” and “of enormous education value and national interest.”

Explaining the history and technology behind ball clay mining dating back some 2,000 years, the museum features a realistic reconstruction of an underground mine tunnel, a rebuilt ball clay trans-shipment building, a 300 metre section of narrow gauge railway as well as an engine shed with viewing area.

Chairman of the Purbeck Mineral and Mining Museum’s volunteer group, Peter Sills, said: “Everyone who has worked so hard to create and staff the Museum was thrilled and delighted that the ‘Open Country’ production team visited us as part of their exploration of this fascinating aspect of Purbeck history.”

Currently closed for the winter, the museum reopens at weekends between 11am-5pm from Saturday, 21 March. It also opens on Tuesday and Wednesdays from May until October. Opening times revert to weekends only in October until 2 November, 2015.

While admission is free, donations are welcome to help fund continuing artefact preservation and museum development.