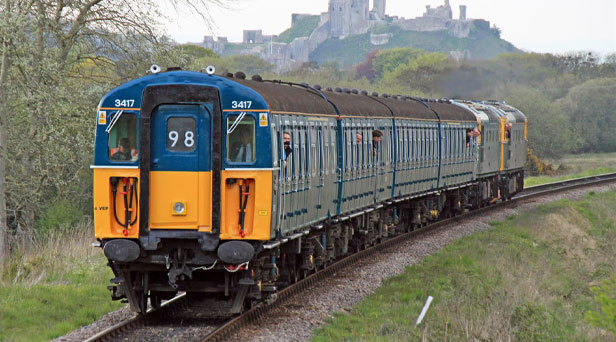 A day of nostalgia – returning the Isle of Purbeck to the Swinging 60s and the Summer of Love – will be marking the 25th anniversary of the end of push-pull slam door trains between Bournemouth, Poole, Dorchester and Weymouth. Push-Pull Day will be staged as a nostalgic prelude to the Swanage Railway’s popular annual three-day Diesel Gala and associated Dorset Beer Festival.

One of the two 1960s-built Class 33 diesel-electric locomotives taking part in the special event on Thursday, 9 May, will be No 33 111 which operated the last British Rail push-pull train to Corfe Castle and Swanage in September 1971 – three months before the line was closed.

May 2013, marks the 25th anniversary of the end of the Class 33-powered slam door 4TC carriage stock push-pull trains between Bournemouth, Poole, Dorchester and Weymouth which gave way to electrification in May 1988.

Replacing steam trains, the push-pull diesel trains were introduced in July 1967 – when the Beatles song, ‘All You Need Is Love’ was number one – and ran for almost 21 years before being withdrawn in May 1988 when Wet, Wet, Wet’s song, ‘With A Little Help From My Friends’ was top of the pop charts.

Six push-pull trains will run between Swanage, Corfe Castle and Norden Park & Ride with the Push-Pull Day also seeing the launch of an anniversary ‘Old Pusher’ pale ale which will also be available at the Dorset Beer Festival being staged in the centre of Corfe Castle at the picturesque Bankes Arms pub overlooking the heritage railway. The Diesel Gala and Dorset Beer Festival take place from Friday to Sunday, 10-12 May and will see 11 classic diesel locomotives in action.