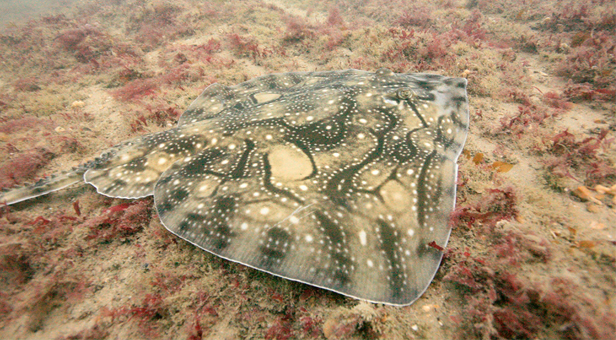 Dorset Wildlife Trust (DWT) has launched a project to raise awareness about the unique eco-system at Studland Bay, which supports rare species such as the endangered undulate ray.

Wardens will be kayaking in Studland Bay throughout the next six weeks, talking to visitors about the fragile eco-system beneath the waves. The aim of the project is to explain the dangers of damage to precious seagrass meadows on the seabed. Seagrass is in decline worldwide, and is a scarce habitat in the UK, yet it provides a home to many precious and rare marine species. By anchoring carefully or using moorings, boat users can continue to enjoy the bay without causing damage.

A new leaflet from the RYA (Royal Yachting Association) will be handed out, which gives boat user’s advice and guidance when anchoring in areas rich with seagrass, such as Studland Bay. Wardens will also be asking for points of view from boaters on how best to manage the site for the benefit of themselves and the wildlife that lives there.

Unlike seaweed, seagrass has an extensive root system that creates a stable environment for all kinds of species, including juvenile bass, bream, flat-fish and both British seahorse species, which have been found to breed in Studland Bay. Other species which thrive in the seagrass habitat include all six species of British pipefish, including the rare Nilsson’s pipefish.