Red Arrows back over Bournemouth tomorrow 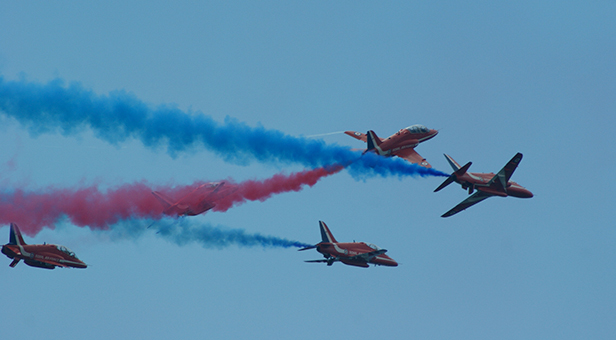 Red Arrows with a spectacular diamond formation by Kay Browning 29.8.2013

As part of the Bournemouth Air Festival, the Red Arrows will be flying over the Bournemouth cliff tops and across the sea tomorrow. Also on the schedule for Saturday is the Battle of Britain Memorial Flight, a Chinook, Sea Vixen, Meteor, Royal Marines Beach Assault, Jet Provost and more. On Sunday, the festival continues with the promise of a Vulcan, Typhoon, Miss Demeanour, Battle of Britain Memorial Flight, RAF Tutor, Swordfish, Royal Marines beach assault and The Blades. Enjoy the festival – it’s visible from the cliffs and beach and it’s free.