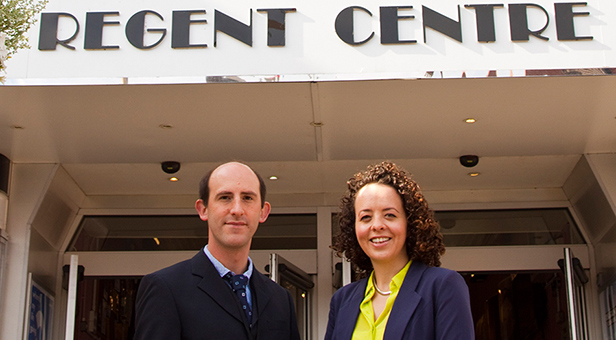 The Regent Centre in Christchurch enters an exciting new phase in its development, as the Board of Directors have taken the decision to strengthen staffing levels with the appointment of the Regent’s first ever deputy manager, Felicity Crabb.

Appointed on 3 September, she will be supporting the manager, Eliot Walker and will have particular responsibility for marketing, customer service, volunteer recruitment and the box office.

Having grown up in Christchurch, she is no stranger to the Regent. She has been a regular at both films and shows over many years.  Indeed, joining the Regent’s team has also been a real family affair for Felicity.  Her grandmother, Eunice, has been a box office volunteer since the Regent re-opened as an arts and entertainment centre in June 1983, whilst Felicity’s father, Paul, is practice manager at Filer Knapper, who have been the Regent’s accountants for many years.

Previously, Felicity was Youth Arts Development Manager with Hampshire Museums and Galleries Trust where she was part of a three year Big Lottery project to engage 14–24-year-olds in Hampshire libraries, museums, galleries, discovery and art centres.  Her experience will form the basis of attracting more young people to join existing audiences at the Regent for films, shows and concerts. She was also the former Head Host at Lighthouse, Poole’s Centre for the Arts from 2006 and has been a guest speaker on engaging young people at Bournemouth University, the Museum of London and NADFAS Youth Arts Seminar.

Felicity has already hit the ground running, meeting the 150 strong volunteer workforce and planning an exciting series of future projects and funding campaigns for the Centre.