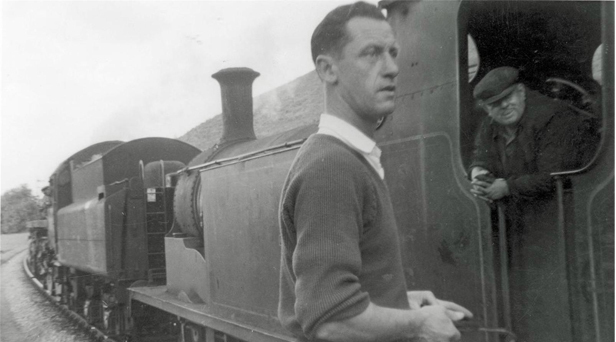 A founder member of the Swanage Railway has paid a heart-felt tribute to the veteran signalman who inspired him to become a train driver – placing a poignant funeral wreath on the front of his steam locomotive.

Bob Inman of Swanage – who worked for British Railways as a signalman at Corfe Castle and Swanage stations during the 1950s and 1960s – recently died aged 87 in a nursing home at Branksome Park, Poole.

On the day of Bob’s funeral on the outskirts of Swanage, Swanage Railway founder member and volunteer train driver Peter Frost tied a memorial wreath to the smokebox door of his steam locomotive in tribute to the signalman who he had known since a small child growing up in Corfe Castle.

And while the funeral took place, a thoughtful Peter let out several long bursts on the locomotive whistle as he drove his Swanage to Corfe Castle and Norden Park & Ride steam train through Herston Halt – within sight and sound of the Godlingston cemetery.

Almost 50 years before, in 1964, Corfe Castle station signalman Bob Inman had prevented Peter Frost – then six years old – from grabbing the signalling tablet from an approaching steam locomotive, preventing the youngster from potentially tripping and falling under the train’s wheels.

After the angry signalman scolded the youngster for his dangerous act, Bob invited Peter and his mother to visit the station signal box to see how the signalling system worked. From that day on, Peter and Bob became firm friends with Peter spending many hours in the signal box and almost becoming a member of the station staff at Corfe Castle.

Now living in Bournemouth, 55 year old Peter Frost said: “Bob’s death is the end of an era and I will always remember his many kindnesses to me as a child when I was growing up in Corfe Castle and the station used to be my playground during the 1960s.

“I owe Bob a lot because it was his kindness in showing me the signal box at Corfe Castle on that day in 1964 – when I was just six years old – that developed my interest in railways and the Swanage branch line.

“I witnessed the sad and lingering death of the Swanage branch line in the late 1960s and was privileged to be part of the small team that started re-building the Swanage Railway from nothing in 1976 when most people thought we were mad. We’ve come so far but there is still much more to do.

“Bob Inman was interested in the growing Swanage Railway and quietly delighted about its increasing success as we steadily relaid the tracks to Harman’s Cross, Corfe Castle and the start of the national railway network between Norden and Furzebrook.

“Thankfully, Bob lived long enough to see excursion trains run to Swanage from various parts of the country because when he watched British Rail rip up the tracks for scrap in 1972, he never thought the railway would ever return,” explained Mr Frost whose parents ran the Greyhound pub in Corfe Castle.

Born and bought up in Swanage – the son of a carpenter from Lymington in Hampshire who helped to build the town’s Victorian pier – Bob served in the Royal Navy in the Far East during the Second World War and left British Railways in 1967 because of the rundown of the Swanage branch line.

Bob leaves a wife, Lyn, who celebrated her 93rd birthday just four days before his death. The pair were married for 61 years and lived in the same house in Swanage for 60 years, having moved into the property – which overlooked the Swanage branch line railway – during September 1952.