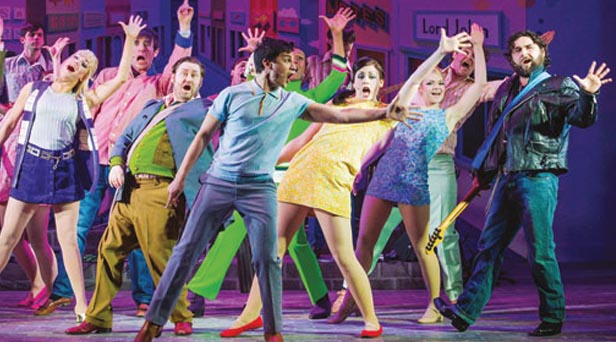 As a stage show, Carnaby Street should be taken at face value. If you go into the theatre hoping to see a masterpiece of musical theatre, you will be disappointed.

Carnaby Street is fun, entertaining and largely forgettable fluff. The musical knows its audience and knows what they want – a few solid hours of adequate entertainment and renditions of popular songs from the Sixties. It’s a pantomime with jokes about Malcolm X and the moon landing. Do not adjust your expectations.

The cast are excellent in their performances and singing and the costume designs charming, despite the fact that the script is thinner than a stick insect.

The jokes largely fall flat and the characters are written as little more than stock characters (‘posh love interest’, ‘northern love interest’, ‘London lad’ and ‘Nice guy’ among others), in an uninspired story about a young man seeking stardom and love in London.

Despite these shallow roles, the  performers work with what little they have as much as they can, to their credit. Paul Hazel as ‘Lily The Pink’, a flamboyant gay designer, deserves particular credit for delivering a majority of the laughs with his effeminate performance – even if his dialogue, with lines such as “I’m heading down the pub for a stiff one” are cringe-worthy in their un PC, outdated nature.

But the story doesn’t matter here, and the show makes no lies about it. The dialogue in between the musical numbers is kept to a minimum – you’re here for the Sixties songs. With many, many pieces, performed very well, including ‘Twist and Shout’, ‘Son of a Preacher Man’, ‘We’ve Gotta Get Out Of This Place’ and ‘Born To Be Wild’, if you’re a fan of the era, Carnaby Street may very well be for you.