Review of Peter Pan, Lighthouse, Poole Centre for the Arts 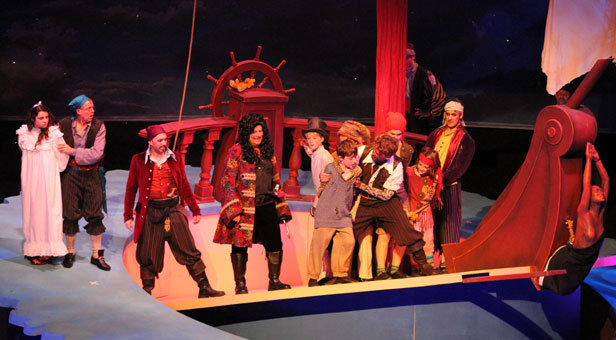 We were promised something different this year at Lighthouse and wow didn’t we get it – this show really flies!

Don’t expect a traditional pantomime – this new musical version of Peter Pan takes the audience to a whole different level of entertainment. This is real theatre but with enough fairy dust to keep the youngest child happy.

There are lots of places to cheer, boo and hiss but this a quality show that kept the audience enthralled from beginning to end.

Jamie Quinn as Peter Pan is definitely the star. His child like enthusiasm bubbles through, convincing you that he will never grow up. He’s one of the best Peter Pan’s I’ve ever seen. And he really knows how to fly, performing acrobatics to the audience’s delight.

He contrasts perfectly with Naomi Morris’ ever so sensible Wendy, trying to keep Peter’s head out of the clouds in Neverland.

Peter’s archenemy, the dastardly Captain Hook is played by Chris Ellison, who also doubles as a rather loveable Mr Darling. Hook and his scurvy pirate crew provide plenty of humour as they are outwitted by Pan’s Lost Boys with help from Tiger Lily and her Indian tribe.

Two teams of talented children play John, Michael and the Lost Boys. Their song and dance routine with Peter Pan was one of the highlights.

There’s always a family atmosphere within the festive cast at Lighthouse with many having being in Christmas productions before. There’s no exception this year: Neil Smye as lovable Smee, Ally Cox as devoted mother Mrs Darling, hapless pirates Matt Cremin and Hugh MacDonald are all making a welcome return. Newcomers Graeme Henderson as Gentleman Starkey and Lora Townsend as both Tiger Lily and an adorable Nana surely earned an invitation to return.

Lighthouse has something remarkable here with Peter Pan. The sets are superb and the lighting deserves praise. There are mermaids, swords fights, the crocodile, Tinker Bell gets the chance to interact with the audience and of course we all get the chance to shout out (very loudly) that we believe in fairies.

Jeff Clarke was commissioned to write this new musical version by Lighthouse. His company Opera della Luna is well known at the Lighthouse and he has a wealth of experience of Christmas shows.

Regional theatres can lag behind London when it comes to innovations. Not here though, as Lighthouse is at the forefront of revolutionary theatre – design wise, not political. A revolving stage has been made specially for this production with the ability to split, turn and lift, allowing spectacular set changes without the need for stagehands. Astonishing.

Peter Pan is imaginative, innovative and inspiring.
Let’s hope this is in the spirit of Christmas shows to come.
Peter Pan continues until 3 January 2016
Photos by Hattie Miles