Review of The Theory of Everything (PG-13)

Remarkable story about a remarkable man 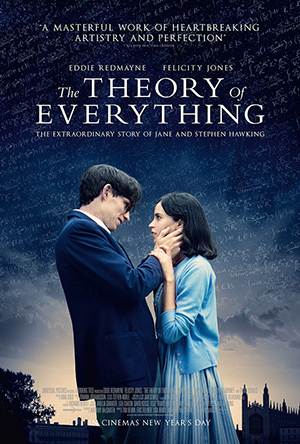 Review of The Theory of Everything (PG-13)

This extraordinary film about the famous theoretical physicist Stephen Hawking gives an insight into what must be one of the greatest stories of devotion ever told. Based on the memoir ‘Travelling to Infinity: My Life with Stephen’ by his first wife Jane Hawking, it starts during the couple’s Cambridge days in the 1960s when they fall in love. At the same time, 21-year-old Stephen develops the devastating symptoms of motor neurone disease and is given two years to live.

Undaunted Jane stands by her man, they marry and have a family. With her unflagging support, Stephen embarks on his most ambitious work, studying time – the very thing he is told he has so little of. Defying impossible odds, he breaks new ground in science, achieving more than most able bodied people achieve in a lifetime. Professor Hawking’s brain, it seems, works overtime almost as if compensating for the failing muscles in his body which put him in a wheelchair and rob him of his voice.

Starring Felicity Jones as Jane and Eddie Redmayne, who won a Golden Globe as Stephen, the story is convincingly and sensitively portrayed.

Seeing The Theory of Everything at the Regent Centre, in the knowledge that in the audience were two young Christchurch stars who had roles in the film, made watching it even more enjoyable.

Oliver Payne aged ten and his Priory school friend Finlay Wright-Stephens, both Swish of the Curtain students, were cast as Stephen’s sons Robert and Tim and got a deserved round of applause as the credits rolled up.

Before the screening Finlay aged nine described the film as sad, phenomenal and quite emotional, which says it all.

Stephen Hawking is now 72 and has beaten all the odds of his daunting diagnosis by over half a century.

This is a must see film about a truly great man who manages to retain a thread of humour in everything he does.