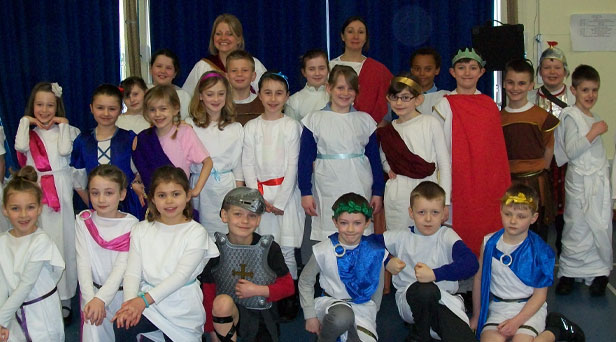 The Year 3 and 4 pupils at Hillside Community First School in Verwood have been learning about the Celts and Romans this term. Their learning culminated by having a Roman Day in school and by visiting Fishbourne Roman Palace at Chichester.

For their Roman Day the children and staff dressed up as citizens, slaves or soldiers and took part in various activities, including decorating a chair for a Roman god, making honey biscuits, creating a Roman tortoise battle formation and having a Roman style feast. Their parents came into school to admire their work.

At Fishbourne the children were treated to a hands-on session with one of the archaeologists, who dressed two of them as a prince and princess and the rest as slaves. They also learnt how to spin wool, build a Roman arch, create a mosaic and write on a wax tablet similar to those used by Roman children.

A trip around the museum gave them a greater understanding of the site’s history and the artefacts found there, but the highlight had to be seeing the many mosaics that the Palace uncovered, along with the hypocaust. History was brought to life for them. The trip to Fishbourne was on a bitterly cold day, but this didn’t dampen the children’s enthusiasm, with one of the pupils declaring, “That was an awesome trip!”