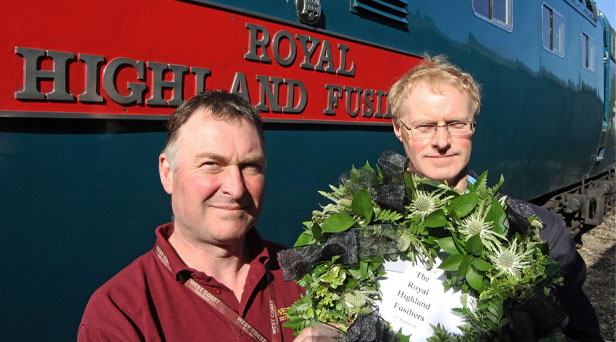 An iconic 1960s express locomotive named after a Scottish army regiment is to carry a poignant wreath during the Swanage Railway’s three-day Diesel Gala in memory of three soldiers killed in Afghanistan.

The 99-ton Class 55 ‘Deltic’ locomotive No. 55 019 ‘Royal Highland Fusilier’ – built in 1961 by English Electric in Lancashire and withdrawn from service by British Rail in 1981 – was named after the Scottish army regiment during 1965 in a special ceremony in Glasgow.

‘Royal Highland Fusilier’ is one of eight visiting main line locomotives starring in the Swanage Railway’s annual Diesel Gala and associated Dorset Beer Festival which takes place from Friday, 10 May, to Sunday, 12 May, 2013, inclusive.

Graham Clarke, of the Deltic Preservation Society, said: “We want to honour the memory of the three fallen heroes from the Royal Regiment of Scotland. We’re proud to bear the name on our locomotive and we have a duty to show respect to the Royal Highland Fusiliers.

“That’s why we will be displaying the wreath on the front of our locomotive to show our respect for the fallen – and to show our support for those who are injured.

“We’ve maintained links with the Regiment since we bought No. 55 019 ‘Royal Highland Fusilier’ back in 1982.  We are proud of that association and we want it to continue long into the future,” explained Mr Clarke, the Deltic Preservation Society’s electrical engineering director.

The ‘Deltic’ locomotives were immortalised in popular culture when a cab view from one hauling an express train to the north on the east coast main line featured in the opening titles of the 1971 hit crime film ‘Get Carter’ starring Michael Caine.

‘Royal Highland Fusilier’ is based at the Deltic Depot at the Barrow Hill Roundhouse near Chesterfield in Derbyshire.

pub in the centre of Corfe Castle which offers grandstand views of passing trains and the historic castle ruins – and has a large garden extending down to the railway and easy access from the station.