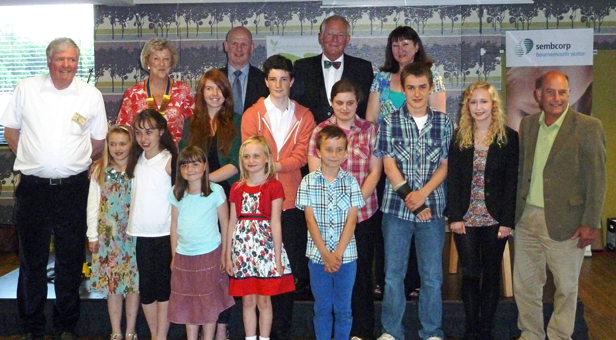 Winning ways: Prize winners in the Young Environmentalist of the Year competition pictured with organisers and sponsors. Picture: Barrie Taylor.

HRH Prince Charles has expressed interest in a Ferndown competition for budding young environmentalists and has asked to be sent a copy of the winning entries.

Organised by the Rotary Club of Ferndown and backed by Sembcorp Bournemouth Water (SBW), Eco Sustainable Solutions and the Ferndown Haskins Garden Centre, more than 125 entries were received from pupils aged from five to 15 years at Ferndown’s three schools.

They included over 100 designs for a sustainable wildlife garden as well as 20 essays and Powerpoint presentations on a wide variety of environmental issues, from wildlife conservation and coastal erosion to litter and vandalism.

Speaking at the prizegiving ceremony, attended by more than 80 people at the Cobham Social Club in Merley, organiser Gerry Clarke praised the hard work, dedication and commitment of the young people entering the competition.

“The standards of entry were remarkably high,” he said. “In fact, so successful has the competition been, next year we aim to roll it out to even more schools in Dorset and Hampshire.”

Simon Morris, General Manager at Ferndown’s Haskins Garden Centre, said that he was pleased to have been able to support the competition by providing prizes including garden tools, gloves, and  vouchers.

The winning entries are on display in Haskin’s restaurant’s Cedar Room for a week from June 17.

In addition to the main prizes winners of the 9-13 age range were presented with a SBW ‘goody bag’ by Richard Stanbrook, SBW’s Director of Retail and Corporate Services, who highlighted the need to reduce water use in order to avoid over abstraction from source rivers.

He also pointed out how people in the UK only used 50 litres per day at the turn of the century but this had increased to 150 which was having an impact on the country’s carbon footprint.