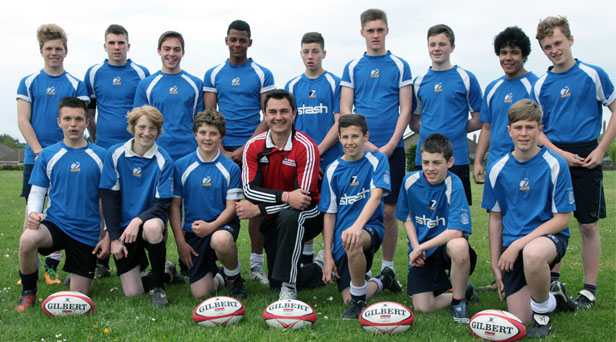 The retired rugby union wing and fullback player spent a whole day at Harewood College, encouraging the students to reach for the stars.

Thinus led two assemblies which shared with the students how success in any field requires the Olympic Values, especially of determination and courage, which are central to Harewood’s ethos.

After the assemblies Thinus trained the school’s elite rugby squads. He also worked with many of the school’s other gifted and talented sports students, alongside coaches at AFC Bournemouth.

Thinus said, “I came away from Harewood College feeling incredibly inspired by the commitment of the young people I met. Hearing how the pupils are putting their new skills and lessons they have learnt into practice is a fantastic example of how sport has the power to change lives.”

Thinus Delport works as an ambassador for the Youth Sports Trust.

He made his senior debut in 1997 on the Springboks’ European Tour and has represented the southern hemisphere in his sport, competing against some of the world’s greatest rugby players.

Assistant headteacher of Harewood College, John Greetham, said: “We were delighted to welcome such a renowned, international sportsman to our college.

“Thinus spent an incredible amount of time with all of our students and I know that every single one of them was inspired by his visit.

“For the boys to hear first-hand the experiences of someone who has reached the very top of his chosen field was motivational for all of them.”