Santa and reindeer fly in for Christchurch Christmas celebrations 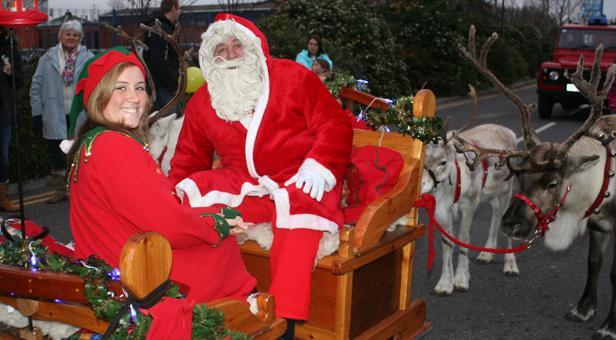 Christchurch will once again be welcoming Father Christmas and his reindeer when they fly in for the Christchurch Christmas Festival on Saturday 30 November. But this year the lights switch-on will take place at a later time.

Father Christmas and his reindeer will fly into Peeks Partystore car park in Reid Street at 4pm and they will then process down Bargates to arrive in the High Street at 4.30pm.

The Christmas lights switch-on will take place in the High Street at the later time of 6pm.

Chairman of the Christmas Festival Committee, Paul Riley, said: “In recent years there have been huge crowds in the High Street for the lights switch-on which has made it very difficult for Father Christmas and his reindeer to get through. It has also made it difficult for people to see the reindeer.

“By changing the timing of the lights switch-on we hope that it will be easier for Father Christmas to get down the High Street. It will also mean that children can queue up at the Priory to see him and then return to the High Street for the switch-on.”

The switch-on will be carried out by the Mayor of Christchurch, Cllr John Lofts along with Heart FM presenters. Characters from this year’s pantomime at the BIC, Aladdin, will also be on the balcony.

The Christmas Festival will include the Christmas Street Market which will be selling a variety of food, drink and gifts from 10am to 7pm.

A craft market will take place in the Priory Church and will be open from 10am to 6.30pm. Here local artists and crafts people will be selling examples of their work which will make great Christmas gifts. The Priory’s Advent Fayre will also be taking place from noon to 6.30pm.