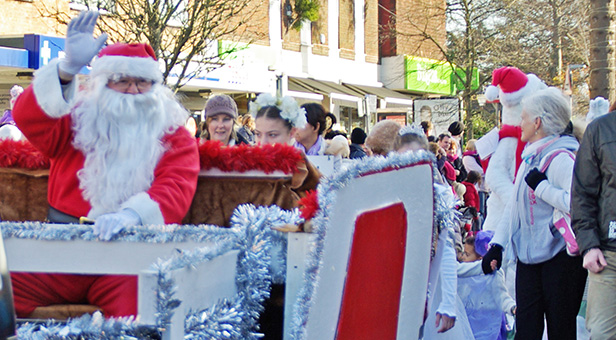 Christmas will definitely be on its way this weekend in Broadstone when Santa arrives during the annual Christmas parade, and there’s a chance he’ll be steaming along.

In its 44th year, the parade will be on Saturday, 7 December. It promises to be bigger and better than ever with over 28 local organisations taking part including a steam engine, local children’s groups, marching band, majorettes, the fire service with a fire engine.

The festive atmosphere kicks off at 1.30pm with a Christmas market selling gifts and crafts. The parade starts in Story Lane at 1.25pm and continues along the Broadway and Dunyeats Road, ending at ‘the toast rack’ (car parking area in front of the shops) where the festivities continue with a Christmas Fair and lots of festive treats and offers from retailers.

Santa will then take his place in the grotto at Broadstone Methodist Church Centre and in a change in tradition, he will be receiving presents from the children. Gifts will be collected by Santa and his helpers for distribution to local children in care via the Ted Webster Family Centre in Poole.

There will be lots of additional events taking place on the day, including a free family film showing, craft stalls face painting and lots more. This year the parade is raising money for two local charities; LEAF (Leukemia Educating and Fundraising) and Broadstone Scout Group.

Come along, join in the fun and get Christmas of to flying start!

New Dorset chief constable to be confirmed in August
July 23, 2021

This website uses cookies to improve your experience while you navigate through the website. Out of these, the cookies that are categorized as necessary are stored on your browser as they are essential for the working of basic functionalities of the website. We also use third-party cookies that help us analyze and understand how you use this website. These cookies will be stored in your browser only with your consent. You also have the option to opt-out of these cookies. But opting out of some of these cookies may affect your browsing experience.
Necessary Always Enabled

Performance cookies are used to understand and analyze the key performance indexes of the website which helps in delivering a better user experience for the visitors.

Analytical cookies are used to understand how visitors interact with the website. These cookies help provide information on metrics the number of visitors, bounce rate, traffic source, etc.

Advertisement cookies are used to provide visitors with relevant ads and marketing campaigns. These cookies track visitors across websites and collect information to provide customized ads.

Other uncategorized cookies are those that are being analyzed and have not been classified into a category as yet.

SAVE & ACCEPT
Powered by