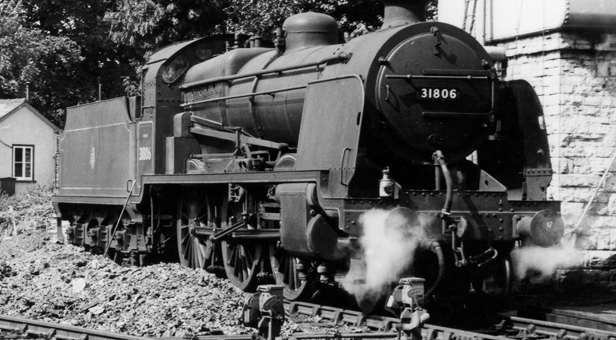 PHOTO: Southern Railway ‘U’ class 2-6-0 locomotive No 31806 at Swanage after arriving with a train from Bournemouth in September, 1955. © ‘John H Aston courtesy of Andrew P.M. Wright

A classic 1920s Southern Railway steam locomotive is to make history when it returns to the Isle of Purbeck for the first time in more than 50 years – to star in the Swanage Railway’s annual Grand Steam Gala and Vintage Transport Weekend.

On loan from the Mid-Hants Railway in Hampshire and nick-named the ‘U-boat’, it hauled popular holidaymaker and day tripper trains from Salisbury, Basingstoke and Bournemouth to Corfe Castle and Swanage during the 1940s and 1950s.

Built at Brighton in 1928, the Richard Maunsell-designed ‘U’ class mixed traffic tender locomotive No 31806 will be the star attraction at the Swanage Railway’s Grand Steam Gala and Vintage Transport Rally from Friday 6 September to Sunday 8 September.

The public will also have the rare chance to drive and fire the classic steam locomotive – under supervision – on Tuesday, 10 September with No 31806 hauling four special driving experience trains during the day, departing Swanage at 11.06am, 12.26pm, 1.46pm and 3.06pm.

Swanage Railway general manager Richard Jones said: “This is an exciting coup for the Swanage Railway and we are very grateful to the Mid-Hants Railway for its very kind help in enabling us to re-create an important piece of post-war railway history at Corfe Castle and Swanage.

“We are looking forward to re-creating another piece of history during our Grand Steam Gala and Vintage Transport Weekend when we hope to pair No 31806 with our Victorian-designed M7 tank locomotive No 30053 because the ‘Us’ and their trains were often piloted from Swanage back to Wareham by one of the branch’s M7s,” he added.

Carrying five tons of coal and 4,000 gallons of water, the two-cylinder ‘U’ class steam locomotives, including No 31806, were nick-named ‘U-boats’ after the First World War because of their go anywhere route availability across the Southern Railway’s operating area of the east, south and west of England.

Noted railway photographer John H Aston captured No 31806 on film in the Isle of Purbeck when the Walschaerts valve gear-equipped locomotive hauled a ‘bucket and spade’ passenger train from Basingstoke, Southampton and Bournemouth down to Corfe Castle and Swanage in September 1955.

Also hauling freight trains, the last ‘U’ class steam locomotives had left the depot next to Bournemouth’s Central Station by the end of 1959 – No 31614 and No 31615 moving to Guildford in Surrey and No 31632 being transferred to Eastleigh in Hampshire.

Withdrawn from traffic in January, 1964, and stored at Fratton depot, No 31806 was sent to the Barry scrapyard in June of that year. It survived the cutter’s torch and was rescued by volunteers from the Mid-Hants Railway in October, 1976.