Saving the fish of the Frome 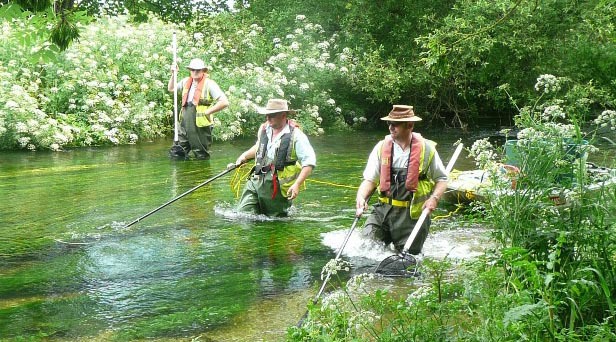 The results of a survey following last year’s major conservation and river enhancement work by the Dorset Wild Rivers Project and Casterbridge Fisheries brings welcome good news to the future of the river Frome, with the numbers of fish rising significantly.

The study was carried out by Casterbridge Fisheries and involved catching and surveying the fish populations in a short stretch of the river.  Its purpose was to measure the impact on fish species after last year’s habitat improvement work on the river, as part of Dorset Wildlife Trust’s Wild Rivers Project.

The changes took place at the Lower Bockhamton section of the river to the Stinsford Channel as it joins the River Frome and included narrowing 150m of river by creating willow mattresses, which help to provide a natural habitat for eels to flourish. The narrowing process also increases the speed of the water flowing, which in turn creates clean gravels which are ideal for fish to reproduce and provide a home for many types of river wildlife.

The results of the survey were very positive and the findings reflected growth in several species including grayling, brown trout and eel. The fish population and habitat diversity has improved, with the overall density of fish rising almost 60%.

There were also positive results regarding the number of eels, making up 50% of the catch for the survey; this is good news after previous concerns that changes to the river may have a negative impact on this species. The grayling, a species of fish which has flourished in the river Frome in recent years, has also risen very significantly from 4.1% to 23.8% of the catch.

This continued variety and flourishing of species is extremely important to the sustainability of the river Frome and its future biodiversity.

John Aplin, Managing Director of Casterbridge Fisheries said, “It was great to be involved in this enhancement project and to see the native species using the site as intended. The gravels are now clean and fish are spawning successfully during the winter. The project also provides the much needed cover for fish fry survival.”

Sarah Williams, Conservation Officer for the Wild Rivers Project added, “Over the last 3 years we’ve worked on over 5km of river. We have more plans for similar projects the next few years and hope to see this positive news continue.”