Scammed in their own home 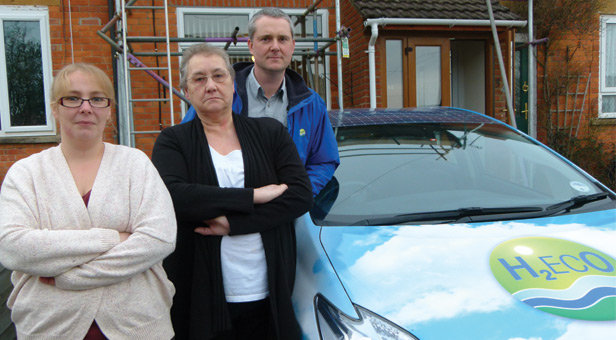 “There is nothing worse than hearing the plight of pensioners ripped off in their own homes.”

Those are the words of a Dorset business man Mike Stephenson, who has just come to the rescue of a Sherborne couple who found themselves more than £1,000 out of pocket when they succumbed to pressure selling from a pushy salesman last year.

Edwin and Christine Price were keen to cut their home energy costs and decided that solar energy would be a good option. In October last year a well dressed salesman persuaded them to buy £4,500 worth of solar panels in a so-called ‘deal on the day’ contract. Using pushy sales tactics the representatives demanded a deposit of £1,125 to be paid there and then to secure the ‘special offer’.

Edwin said, “Having recently had a knee operation I was unable to drive and he refused to take a credit card. He was very insistent and ended up driving me to the building society. We felt very pressurised.”

Needless to say, despite the promise of installation within a week, a month later the Price’s had heard nothing from the company. They contacted Trading Standards who advised them to send a registered letter to the firm, and the next day they received a telephone call informing them the business had gone bankrupt. At that point they realised they would never see their hard earned savings again.

The story however now has a happy ending as Mike, who runs H2 Eco in Poole, has recently installed a solar PV system at the couple’s home, at a loss to himself but at the price they would have paid, minus their lost deposit.

“It outrages me that some cowboy traders still use high pressure selling in the home” commented Mike, “We have called for a ban on ‘deal on the day’ which comes under doorstep selling. There is no reason at all that any company selling any product should expect a client to sign there and then, especially in the false promise of getting a better deal or discount. Rogue traders give reputable, ethical companies such as ours in the solar industry a bad name.”

Along with green energy website YouGen, H2 Eco has also launched an online petition to get the law changed to prevent situations such as the Price’s occurring. The campaign also has support from their local MP Annette Brooke OBE.

Since completing the installation last week, Edwin and Christine can now begin to reap the rewards of their green energy. Asked what advice Edwin would give to other people thinking about investing in solar panels or any other home improvements he said, “The Dorset Trading Standards officer advised us to look for the Buy with Confidence logo. Any company using this has been carefully vetted and operates to higher standards. Also, never sign up on the day. By law you have 7 days to consider a sales proposal. You don’t have to accept the blarney from a pushy sales person. I hope by telling our experience we can prevent other people from getting conned.”

It appears that the experience of Edwin and Christine Price is far from isolated. Mr Stephenson added, “Over the past 6 months I have come across several cases of pressure selling in the home across Dorset, often pensioners or women who live alone. I think it is despicable, and would warn any home owners to be vigilant and don’t be bullied into signing any contract there and then.”

Mr Stephenson has written an open letter to Climate Change Minister Greg Barker and Jo Swinson, Minister for Consumer Affairs, asking them to ban ‘deal on the day’.

If you are interested in finding out more about renewable energy visit www.h2-eco.com or give them a call on 01202 918486.

PHOTO: Christine Price and her daughter Nicola Hale from Sherborne with Mike Stephenson from H2 Eco in Poole.