Shelling out for the ultimate Fabergé Easter egg 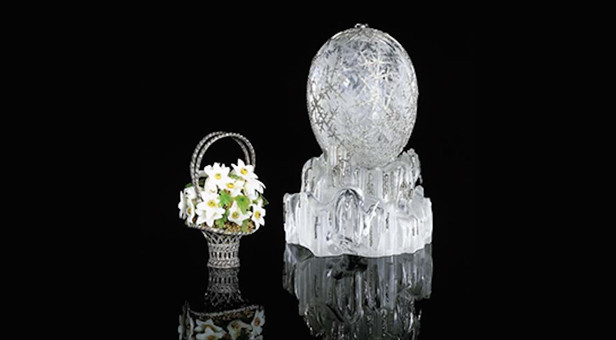 The Winter egg given to Tsarina Maria Feodorovna by Nicholas II at Easter 1913.  It contained the flower basket and is now in a private collection in Qatar

Surely the ultimate Easter Egg has to be the Fabergé kind?

In total there were 50 jewel-bedecked eggs commissioned by the Russian Tsar, as an annual Easter gift for his wife the Tsarina. The first Imperial egg was produced in 1885 on the orders of Alexander III of Russia. Maria Feodorovna the Tsarina was so fond of these eggs that Alexander appointed Peter Carl Fabergé to the Royal Warrant. Every Easter, he and his colleagues presented a new egg, totally unique, with a surprise inside. Nicholas II of Russia took over the tradition and went on to provide the unique Easter gifts both to his wife, Alexandra Feodorovna and the widowed Tsarina. Seven of these jewel-encrusted Fabergé eggs are still missing

Pontus Silfverstolpe, co-founder of Barnebys, the auction search engine, said: “We know that one egg went with Maria Feodorovna in 1918 when she left the country. The other eggs were forgotten or removed during the Russian Revolution, some of which were stolen. In the 1930s Joseph Stalin sold 14 eggs through western auction houses to raise much needed money.

“During WW2 some of the lost eggs were traded for bread and food. Recently an American scrap dealer bought an egg in a flea market which turned out to be one of the then eight missing Fabergé eggs.”

In 2004 there was great excitement when the Russian gas and oil billionaire Viktor Vekselberg bought the world’s second largest Fabergé collection of nine eggs. He commented to the BBC after the sale: “The religious, spiritual and emotional content captured by these Fabergé eggs touches upon the soul of the Russian people.”
The 43 eggs are now in collections in Russia, America, Germany, Qatar and Monaco. Three are owned by the Queen and there are 10 Imperial eggs in the Kremlin museum in Moscow.