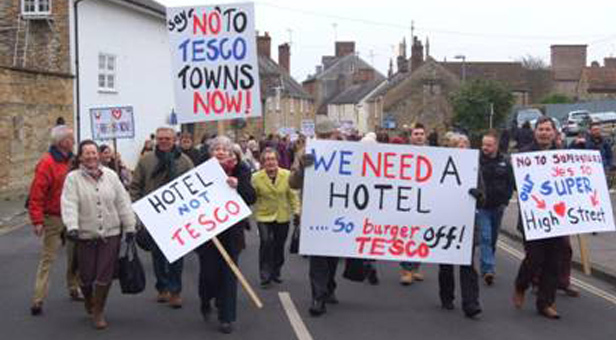 Hundreds of Sherborne business owners and residents took to the streets of the picturesque Dorset market town this week to fight proposals for an out of town Tesco superstore on the site of The Sherborne Hotel on the A30. Led by local celebrity Valerie Singleton, protestors carried placards denouncing the plans as they marched from Cheap Street to Digby Hall on Hound Street for a public consultation by the retail giant. Twenty shops throughout the town centre closed for one hour and many boarded up their windows and switched off lights, in a display of strength and unity never before seen in Sherborne.

Former Blue Peter presenter, Valerie Singleton, said, “Anybody who lives in and cares about Sherborne should stand up and let their opinions be known – and that is exactly what happened on Tuesday. There were 709 people through the door of the Digby Hall in the first hour, and an overwhelming vote of 663 against and only 43 for. Sherborne is a busy, vibrant and successful town and we don’t want the high street damaged.”

Andrew Maddock, Vice Chair of the Sherborne Chamber of Trade and Commerce, added,  “The No Thanks Tesco campaign now has 10,000 petition sign-ups and this day of action really managed to galvanise the whole community. Unfortunately a lot of people were left feeling very let down by the consultation process, because instead of having Tesco representatives up on stage to field questions from the public, there was just a small handful of advisers mingling in the crowd. It wasn’t the public consultation that we had hoped for and expected, and many people came away feeling that they had been short-changed by Tesco and that their voices weren’t properly heard.”

Historic Sherborne has a thriving tourism industry; positioned at the gateway to Dorset it is home to an 8th century Abbey and two castles.  30% of the town’s trade is generated by visitors who are drawn to its medieval buildings, unique high street and wealth of independent shops.  Local businesses fear Tesco’s plans to demolish a busy 60-bed hotel and replace it with an out of town superstore will create a downturn in town centre footfall, leading to redundancies and closures as shops, restaurants and service providers bear the consequences.

Sherborne’s population of 10,000 is already well served by two town centre supermarkets, convenience stores, independent shops and local markets. Many of the town’s existing retailers would be under immediate threat; its butcher, wine shop, bakers, florists, newsagents, delis, confectioners, newsagents and markets for instance. Business owners are concerned that, as those longstanding independent shops fail, the town centre will become a less attractive place to visit, shop, work or live – leaving every business affected by an eroded town centre in the future.