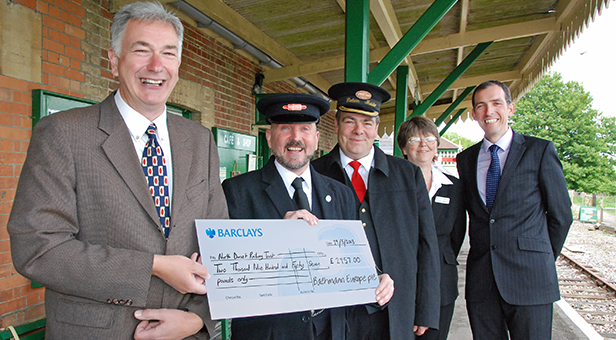 The Shillingstone Railway Project in North Dorset is celebrating following the presentation of a substantial cheque from the leading model railway manufacturer Bachmann Europe.

This is all the more important as 2012 was the 150th Anniversary of the founding of the Somerset & Dorset Railway, the iconic cross-country railway route that ran between Bath and Bournemouth. The line was closed in 1966 but several groups including the North Dorset Railway Trust at Shillingstone have been restoring stretches of the line.

There has been much activity in the model railway world. Alongside the range of Shillingstone buildings, Bachmann has also released several versions of the Somerset & Dorset 7F freight locomotive.

Derek Lester-Jones, Retail Manager at the Shillingstone Station Project, reflected on the Bachmann initiative: “The monies received could well go towards sections of the track which will bring the locomotives closer to returning on another part of the Somerset and Dorset Railway.”

The North Dorset Railway Project has been restoring many of the buildings covered by the Scenecraft range. In addition, a replica of the original signal box has been built and a replica of the down platform shelter is nearing completion.

Scenecraft’s Graeme McMillan noted the challenges in the project: “While some of the structures are still standing and have been beautifully restored, others have been demolished and so it was a challenge to achieve the level of accuracy that railway modellers demand. It was a pleasure to work with the team at Shillingstone and we are proud of what we have achieved.”

The Shillingstone Railway Project is restoring the former Dorset Central station on the famous and iconic Somerset & Dorset Railway. This will recreate the station as it was in the great days of travel by steam train when Shillingstone was on the much-loved and much-missed holiday line from the north down to Bournemouth.

None of this is possible without funding and manpower. The Shillingstone Railway Project is entirely reliant on volunteer support to restore the station, develop revenue-earning events and take the project forwards. The project welcomes new members whether they are armchair supporters or active working members who can give some of their spare time to help in different areas.

Shillingstone Station is located off the Blandford Forum to Sturminster Newton Road. It is clearly signed shortly before leaving the village of Shillingstone.