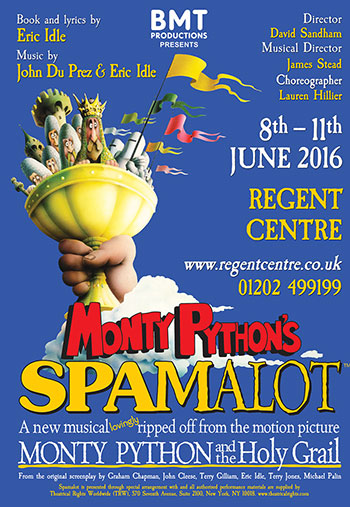 A load of codswallop! What better way to describe the famous Finland Fisch Schlapping Song with its Pythonesque humour and matching costumes? From that point on there was no doubt that a (k)night of laughter and merriment was in store. And it wasn’t long before King Arthur and his coconut shell hooves, clattering faithfully in the hands of faithful Patsy, made an entrance followed by a line of monks hitting themselves on the head with giant Bibles.

With such silliness in the opening stages, this musical comedy, adapted by Eric Idle and John Du Prez from Monty Python and the Holy Grail, promised to carry on and on as King Arthur and his knights trotted off on a hilarious quest. Set by God himself, or rather Eric Idle, appearing on video screen above the stage and threatening to invent America if King Arthur doesn’t do what he’s told and find the Holy Grail, the humour rolled out like a yellow brick road. It led nonsensically from the Lady of the Lake to a side-splitting French scene, with insults a-plenty and a giant wooden rabbit (of Troy) to boot.

Could it get any better? Yes, because after the interval Always Look on the Bright Side of Life had everyone singing and the Knights who say Ni demanding a shwubbery raised snorts and chuckles. The lunacy continued with an outrageous rendition of You Won’t Succeed On Broadway and the coming together of Lancelot and Prince Herbert. The discovery of the Holy Grail under the seat of Christine Townsend who was sitting innocently in the audience brought everything to a great conclusion.

And naturally there were underlying digs and quips that we could all relate to, especially trump the moron!

With great projection (of voices) and excellent solos, everyone contributed to the success of this hilarious stage performance. Of particular note were King Arthur (Mark Everitt), the Lady of the Lake (Becky Willis), the French taunter and Knight of Ni (Michael Grist) and Sir Robin (James Dixon-Box).

It was a night to remember at The Regent Centre and there is still time to purchase tickets to this show.