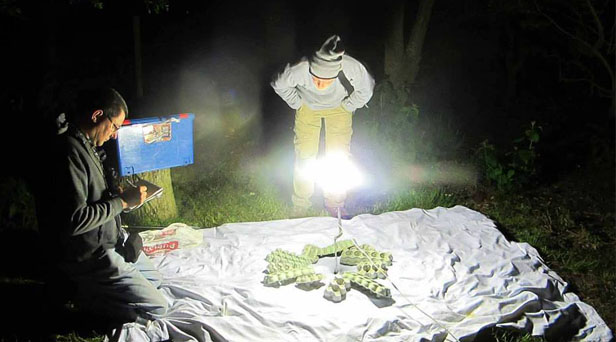 A ‘bioblitz’ held over a 24-hour period at Stanpit Marsh Nature Reserve in Christchurch has logged more than 400 species of plants and animals.

The event focused on finding and identifying as many species as possible on the marsh. Organised by Christchurch Council’s Countryside Service, it was designed as a way of carrying out an up-to-date survey of the reserve but also to give everybody the opportunity to join in with the survey and find out about biodiversity and conservation.

Throughout the day and night people had the chance to find out about the work of their local countryside service and to join scientists and naturalists to spot and add to the wildlife inventory for the marsh.

The evening kicked off with a dusk bird walk, a hunt for reptiles and amphibians, a bat talk and walk and moth trapping. There was even a history walk with a re-enactment of smuggling that looked particularly spectacular against the full moon.

An astronomer was on hand to tell people about the night sky, including a rare triple planetary conjunction of Jupiter, Venus and Mercury. The moth trappers were last to bed, trapping until past 1.00am.

Sunday morning began bright and early with a dawn chorus walk. Early risers were treated to a fully organic breakfast served on the porch of the MarshPod information centre after the walk. The finale to the event, which came some 25 hours after the start, was the grand opening of the previous night’s moth and mammal traps.

Over 200 plants were identified, with a few that hadn’t been recorded for several years, 20 species of lichen and six species of moss. Also recorded were 50 invertebrates, including 35 spiders, more than 80 birds, three fungi and eight species of mammal including dog, cat, cow, horse, mole, rabbit woodmouse and, of course, human.

As well as an important audit of the health and wellbeing of the marsh, the event was also designed to promote public interest in biodiversity. Senior Countryside Officer Peter Holloway said: “The bioblitz was an opportunity to encourage more public participation in nature conservation through a series of guided walks and workshops. With the public’s help we were able to conduct an intensive field study of the reserve that will add to our knowledge of the marsh.

“We were fortunate to have a good number of wildlife experts with us from a number of groups including the Friends of Stanpit Marsh, Christchurch Harbour Ornithological Group and the RSPB. There were botanists, entomologists and an even an arachnologist who alone recorded 30 species of spiders.”