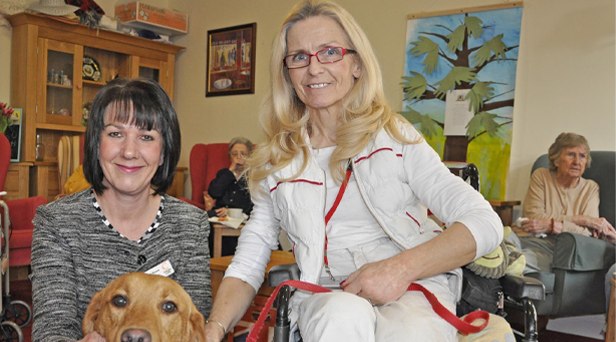 RESIDENTS and staff at a Dorset care home provider are sponsoring a disability assistance dog they named after a departing manager.

Liz Benson met her canine namesake, eight-month-old Benson the red Labrador, as Colten Care handed over a £1,780 cheque towards his training by Woofability. The money was raised through a garden party and other events after residents chose the voluntary group as a charity to support.

The cheque presentation was also a chance to say farewell to Liz, who is moving on after more than four and a half years as a Colten Care Operations Manager. Her responsibilities have included the Avon Reach home in Christchurch and three homes in the New Forest. Residents and staff decided to name their sponsored puppy after Liz as a thank-you for all the help she has given them.

Liz said she was overjoyed to meet Benson face to face, adding: “I will certainly miss colleagues and many of the residents who I have got to know well over the years. I wish them – and Benson of course – best of luck for the future.”

Woofability trains dogs to help disabled people with practical tasks such as getting dressed, emptying the washing machine and picking up the post. The dogs can even be trained to detect an epileptic fit and so raise an alert.

Benson is the second dog to go through Woofability training sponsored by Colten Care. Last year a puppy called Hudson was funded with help from the company’s Avon Cliff home in Bournemouth. He was named after Colten Care Managing Director Ian Hudson.

Jenny Clarke, co-founder of Woofability, said: “The support from Colten Care is helping us make a real difference to people’s lives across Dorset, Hampshire and south Wiltshire. “We have 39 dogs in training at the moment. They tend to be between two and three years old before they are homed with a disabled person. They are appreciated by everyone from autistic children to people living with Alzheimer’s and dementia.”

Colten Care owns and operates 19 homes across the South providing a range of services including quality residential, nursing and dementia care.