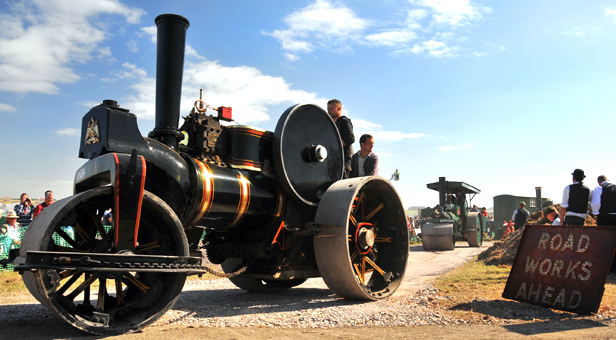 102 steam rollers took part in the GDSF 2013 Roller Special, on a brand new road created in the road making section at the event. This smashed the previous record of 32, which was also held by the Great Dorset Steam Fair.

The world record attempt has been officially acknowledged by Guinness World Records Ltd and one of the independent witnesses was Colin Tyson of Old Glory Magazine, a well respected figure in the steam industry.

Great Dorset Steam Fair Managing Director Martin Oliver, said: “Wow, what a sight! We are so privileged to be in the presence of so many beautiful engines and to have broken the world record is just phenomenal. I would like to personally thank everyone involved as well as all our visitors, without whom we could never have achieved this triumph.”

Janine Pulford, the editor of mags4dorset was there and added, “It was incredible to watch the steam rollers pass by one by one, and to see how hard the drivers work to  manoeuvre their much loved engines. It was a truly spectacular event, made all the more watchable because the steam rollers were fuelled by smokeless fuel for the first time in the fair’s history and I found this a great improvement on previous years.”

Some of the requirements for the world record attempt were:

The attempt featured a unique range of steam, petrol and diesel rollers from the leading manufacturers throughout the history of road rolling. As well as examples from the more common manufacturers, there were also those on show from the rarer makes of roller with some even attending from abroad.

Overall the Great Dorset Steam Fair was hailed as a very successful event with over 200,000 people visiting over five days.

Managing Director Martin Oliver says: “We would like to thank everyone for their support at this year’s show. We’ve had a fantastic week, the weather’s been brilliant and it’s probably one of the best events we’ve put on in the 45 years of the Steam Fair. I’m sure my Dad would have been really proud of the show this year, particularly the Roller Special Display. I look forward to seeing you all again in 2014.”

The Michael Oliver Memorial Cup for the Best Exhibitor was presented by Martin Oliver to Graham Atkinson of Burbage, Leicestershire, for his 1932 Aveling & Porter motor roller which was featured in the Roller Special Display. After receiving the award, Graham said: “I never thought I’d get anything like this. I’m over the moon and chuffed to bits. I really do feel quite emotional.”