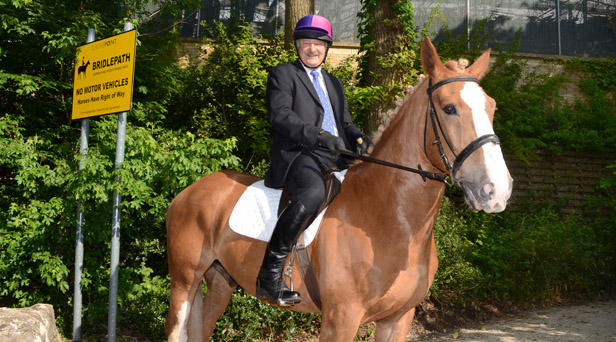 32 tonnes of special surfacing was laid in 4 days by a local contractor to make what has been used as a footpath over the last 10 years, safer and more comfortable to riders and their mounts.

Peter Matthews, General Manager at Castlepoint, was the first to inspect the new signage and surface by riding his own horse Jim, who was transported from his stable at Stock Farm Equestrian Centre at West Parley for the test ride.

“People are surprised that the Bridle Way has been frequently been used by riders since the construction of Castlepoint,” said Peter Matthews.  “We felt that as we are trying to encourage people to consider using greener transport to come shopping, why not make it more equestrian friendly!”

He said that daily patrols and security camera monitoring would look out any manure deposited on the route and picked up for the use in the landscaping.