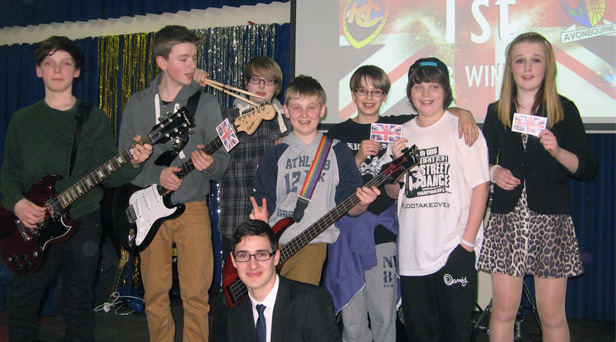 The joint Harewood and Avonbourne’s Got Talent competition culminated in a grand finale which was staged this week.

Ten finalists from both schools – who were whittled down from more than 50 acts – performed to their fellow students and a special judging panel.

After a highly entertaining performance from all the acts, street dance duo Connor Stone and Liam Wheldon, Year 7 students from Harewood, were judged the winners by the audience and the judges.

Executive headteacher of both schools, Debbie Godfrey-Phaure, said: “The final night was a sell out and the atmosphere was truly electrifying – all the performances were excellent.

“So much work went into making this event such a big success. In January and February we held auditions at both schools and more than 50 acts competed for a place in the grand final.

“Ten acts were chosen and all of them have been rehearsing and working so hard, performing to staff, assemblies and other events before the big final.

“They all showed Avonbourne and Harewood colleges have definitely got talent.”

The finalists ranged from singers and dancers to bands – and even a diabolist. The night was excellently compered by Will Coe, head of house at Harewood.

After a keenly fought contest the votes were cast by text, by house votes and by paper votes and winners Connor and Liam signed off with a final dance.