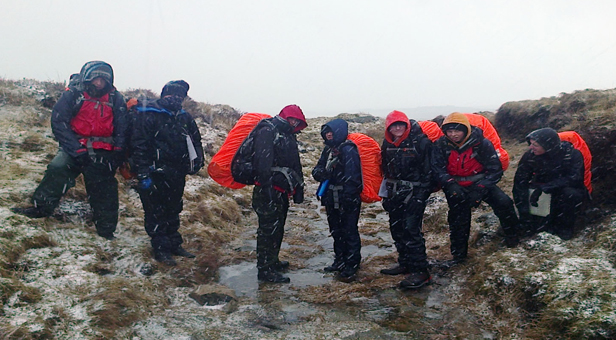 The boys from Oak Academy – LeAF Campus walked up to 45 miles across Dartmoor in gale force winds, torrential rain and amongst flooding streams in just two days and without any adult assistance.

Conditions were so tough that more than 400 teenagers failed to complete the course.

But Daniel Payne, Charlie Pike, James Bourton, Lewis Roberts (all in year 10) and Daniel Harwood, Higor Schneider (both in Year 9) were able to complete the course – with time to spare.

Oak Academy’s Dave Turner supported the boys’ training from day one. He said, “This fantastic achievement has been borne out by a year’s worth of training, planning and sheer determination.

“The boys have put everything into this, including giving up their weekends, and we are so proud of them for completing the Ten Tors in what were the most testing conditions.”

The Ten Tors challenge is run by the armed forces and invites teams of six teenagers aged 14 to 19 to complete ten routes across Dartmoor.

To be successful every team member must finish the course and within a time limit over the two days.

The course is 35 miles in a straight line but the actual mileage covered is more in the region of 50 miles.

This year’s event was held earlier this month on a Saturday and a Sunday when the south west was hit with appalling weather conditions.

Fifteen year-old Lewis Roberts said: “We worked so well as a team – it was the only way we could get through it.

“When one of us was struggling the other five would support us and get us through.

“We have trained so hard and I think the awful weather we’ve had in the winter and the spring put us in a good position for the real thing!”

Oak Academy, which is part of the Learning and Achievement Federation (LeAF), previously entered teams in 2009 and 2012.

The school is expected to enter another team in 2014.