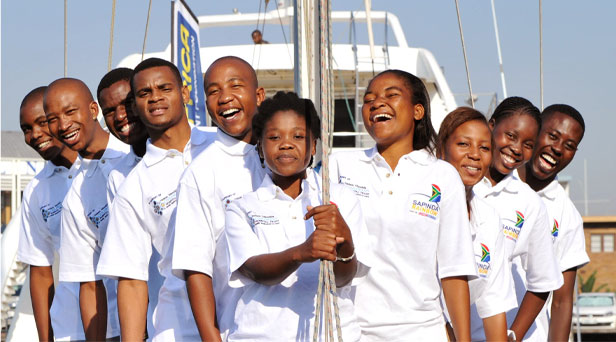 Clipper Ventures, with Sapinda Rainbow and Nelson Mandela Children’s Fund (NMCF), has revealed the eight young South Africans selected to create a ‘tag’ team, each to participate in one of the eight legs of the Clipper Round the World Yacht Race – at 40,000 miles it’s the longest ocean challenge on the planet! The unique initiative aims to develop young community leaders of the future and global ambassadors to raise international awareness and funds for the Nelson Mandela Children’s Hospital.

Mpaki Pule, donor relations manager with the Nelson Mandela Children’s Fund was present at the announcement and said: “This is a unique partnership and the opportunity it will give us to reach a global audience to support the Nelson Mandela Children’s Hospital project is another important dimension. I think it could make a huge contribution towards achieving Nelson Mandela’s legacy of a world class specialist medical facility for South Africa’s Children. I would like to thank everyone who has made this possible, especially its sponsor, Sapinda Group.”

The initiative is funded by the Sapinda Group to give young people a unique personal development opportunity through participation in a life-changing global adventure and at the same time encourage them to become a catalyst and role model within their own respective communities.

The team will leave for the UK from Cape Town on Friday 26 July – the official ‘birthday’ of NMCF – to undertake an intense period of training prior to the race start on 1 September 2013. Cape Town is the South African host port for the Clipper Race and will host the fleet of twelve 70 foot ocean racing yachts in late October.

Founder and Chairman of race organisers Clipper Ventures, legendary yachtsman Sir Robin Knox-Johnston has sent a message of congratulations to the crew that have been selected for the Sapinda Rainbow project. Sir Robin said: “Congratulations on being selected to take part in the 2013-14 edition of the Clipper Round the World Yacht Race.  I look forward to meeting you when you come to England for your training.   I shall watch your progress with interest.   By passing the selection process you have created for yourselves a wonderful opportunity and a chance to develop those elements of skill and character that will be a sure foundation for the rest of your lives. Well done and good luck.”

The eight crew and two reserves are pictured.