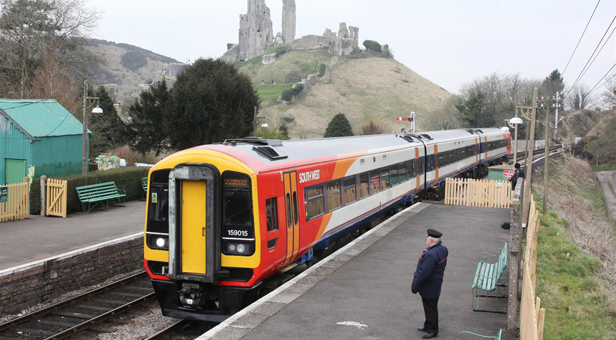 History has been made with SouthWest Trains running its first passenger train from Bournemouth to Corfe Castle and Swanage – to show dignitaries and stakeholders the progress being made towards re-introducing a regular amenity train service from Swanage to Wareham.

The last time such a train ran was on New Year’s Day, Saturday, 1 January, 1972, when the last British Rail trains ran on the dying Swanage branch line before it was controversially closed and the tracks lifted for scrap.

Forty-one years later, the visit of the modern three-coach SouthWest Trains Class 159 diesel train No 159015 took place on the day before the 50th anniversary of the controversial Beeching Report, published on 27 March, 1963, which closed several railway lines in Dorset.

Swanage Railway Company Chairman Peter Sills – who travelled on the last British Rail train from Swanage as a teenager in 1972 – said: “I am very grateful indeed to SouthWest Trains and Network Rail for their very kind help in enabling this historic and very special train to run on our behalf.

“It gave us the chance to show Dorset dignitaries and stakeholders the progress being made towards re-introducing an amenity train service from Swanage and Corfe Castle to the main line at Wareham – Beeching in reverse. It was a very exciting day and the feedback was very positive.

“The special train also enabled our guests to travel on the three mile Network Rail line from Worgret Junction, on the main London to Weymouth line just west of Wareham, to the start of the Swanage Railway just east of Furzebrook – a stretch of line only used by occasional excursion trains from various parts of the country down to Corfe Castle and Swanage,” explained Mr Sills.

Heading for Furzebrook and the start of the Swanage Railway

Phil Dominey, SouthWest Trains-Network Rail Alliance Stakeholder and Accessibility Manager, said: “We are delighted to have been involved in such an historic journey and we believe it was a informative and enjoyable day for everyone involved.

“Following a successful test in December, we were able to use a Class 159 unit which made the first visit of this class to Swanage.

“We are proud to see one of our diesel trains in passenger use on this heritage railway for the first time in 41 years,” explained Mr Dominey who also travelled on the last British Rail train from Swanage to Wareham in 1972 as a child.

Speaking on behalf of the Purbeck Community Rail Partnership, Steve Mackenzie, Chief Executive of Purbeck District Council, said: “It was a fantastic step forward for a modern passenger train to travel the full length of the Wareham to Swanage branch line.

“The goal of a regular passenger service between Wareham and Swanage is the aspiration of the District Council and its partners in the Purbeck Community Rail Partnership,” he added.

The special train crosses the viaduct at Corfe Castle

Swanage Railway volunteer guard John Stopher, of New Milton, at Swanage – he took the special train from Motala to Swanage

Swanage Railway was awarded a £1.47 million Government grant from the Coastal Communities Fund in February, 2013, to re-introduce a regular train service from Swanage and Corfe Castle to the main line at Wareham – giving an important transport, tourism and employment boost to the Isle of Purbeck.

The Swanage Railway is also working in conjunction with the Swanage and Purbeck Hospitality Association and the Dorset Local Enterprise Partnership to deliver improved transport and communication links to the residents and businesses of Purbeck.

As well as improving access by train to the heart of Purbeck for tourists – and improving rail links out of Purbeck to Poole and Bournemouth for residents – it is estimated that a restored train service between Swanage, Corfe Castle and Wareham will create 40 new jobs indirectly and ten new jobs directly.

The special South West Trains Class 159 diesel train picked up dignitaries and stakeholders at Bournemouth, Poole and Wareham before travelling to down to Corfe Castle and Swanage.

A second return trip from Wareham to Corfe Castle and Swanage took place for Swanage Railway volunteers and staff – some of whom had travelled on the last British Rail train from Swanage to Wareham in January, 1972.